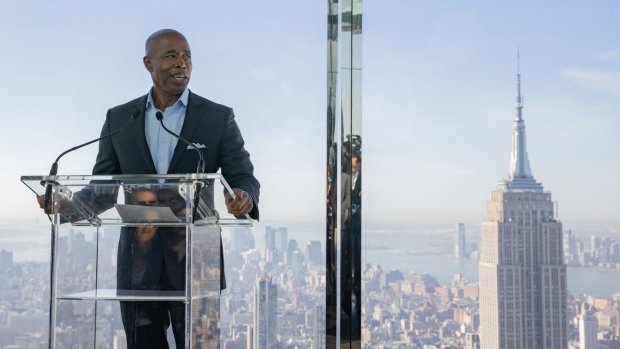 Bill de Blasio, mayor of New York, speaks during a news conference outside a Covid-19 vaccination hub inside Yankee Stadium in the Bronx borough of New York, U.S., on Friday, Feb. 5, 2021. Restaurant workers, taxi drivers and workers at developmentally-disabled facilities could become eligible to receive Covid-19 vaccines if local governments choose to include them, Governor Cuomo said. , Bloomberg

Eric Adams will take over as New York City’s mayor on Jan. 1 staring down a host of fiscal challenges largely stemming from the pandemic and the uncertain outlook it’s created for the biggest U.S. city.

Two years of the coronavirus has hobbled tourism and left the future of the commercial office sector in doubt, while the city confronts an increase in violent crime and a 9 per cent unemployment rate -- the highest since 2013. A post-pandemic return of the galloping growth in tax revenue that helped fund outgoing Mayor Bill de Blasio’s expansive vision of government services is far from certain.

Furthermore, the roughly US$20 billion in pandemic-related federal aid the city received will be fully spent over the next several years, even though billions of those dollars are being used to pay for programs that are intended to be permanent. An eviction moratorium that officials say is largely responsible for the significant decline in the number of homeless families living in New York City’s shelter system over the past two years is set to expire Jan. 15, potentially raising the need to spend on housing and services for the poorest.

“It becomes a problem when revenue comes in lower than anticipated, and the federal money is no longer there to provide a support,” said Rahul Jain, New York state’s deputy comptroller. “When you’ve added all these services, overall, the recurring cost goes up.”

An additional complication for Adams, 61, is that de Blasio is leaving office with unresolved labor contracts.

Agreements for three of the largest unions representing police officers, firefighters and other municipal employees have expired, and the teachers’ contract ends in 2022. The city hasn’t set aside cash for the first two years of raises, and each 1 per cent increase could boost labor costs by an estimated US$460 million when fully annualized, according to the state comptroller.

The city may face budget deficits of more than US$5 billion each year for the next three years, according to estimates from the state comptroller’s office. The de Blasio administration disagrees, predicting a gap of just US$2.9 billion for the fiscal year beginning July 1, though that includes fairly rosy forecasts for a recovery in tourism and assumes that property values will rise. It also includes US$500 million in unspecified labor savings.

By some measures, de Blasio, 60, has been a responsible steward of New York’s finances. The city has the same bond ratings it did when he took office, and its debt has declined when measured as a percentage of residents’ income and assessed property value, according to the city comptroller.

However, spending outpaced tax revenue. De Blasio increased the city’s budget 38 per cent to US$101 billion in the fiscal year that ended in June from US$72.9 billion in fiscal year 2014. Tax revenue rose 35 per cent during the same span, financial reports show.

Over his two terms in office, de Blasio almost doubled spending on youth programs and increased the education budget by more than 50 per cent to US$28.3 billion. His most notable accomplishment may have been the creation of universal free pre-k for all of the city’s four-year-olds. Spending on homelessness more than doubled to US$3.5 billion between fiscal 2014 and fiscal 2020.

“He was twice fortunate,” said Andrew Rein, president of the Citizens Budget Commission, a business-backed budget watchdog. “First, riding a really strong economy and second with what may have been the biggest bailout of a local government during a recession.”

Critics contend that de Blasio often simply threw money at problems and didn’t pursue the kind of savings planning programs his predecessors had used. Budget watchdogs warned that the pace of spending growth, roughly 5 per cent a year, was double the rate of inflation during most of his administration and unsustainable in the event of an economic downturn.

That tension could soon come to a head. In the past few months, it’s become clear that the city is recovering from the pandemic at a slower pace than the rest of the country, and now the omicron variant threatens to prolong the pain. By October 2021, the city had recovered just 490,000 of the 933,000 jobs lost when the pandemic began. The same month, only 28 per cent of Manhattan office workers had returned on any given weekday, according to surveys conducted by the Partnership for New York City.

The city budget assumes that overall employment will reach pre-pandemic levels by late 2024, which would require the city to gain an average of more than 160,000 jobs annually, much higher than the roughly 100,000 jobs added each year in the decade prior to the pandemic. The budget predicts hotel tax revenue will reach pre-pandemic levels by fiscal year 2025.

The new mayor will need to pare the city’s budget amid a pandemic that’s made all but the most short-term planning difficult. And he’ll have to do that while he contends with the persistent problems of gun crime, a massive housing shortage and the repercussions of high unemployment.

Adams “is facing a level of economic uncertainty that we think is unprecedented,” said Elizabeth Brown, communications director at the New York City Independent Budget Office, which collects data about spending and tax revenue.

Adams is creating new positions inside City Hall to help better manage the city’s finances, including a “chief efficiency czar” and a team to root out waste in city government, campaign spokesman Evan Thies said in an email.

The mayor-elect believes “inefficiency leads to inequality,” Thies said, adding that Adams and his team plan to lay out their cost-savings plans early in the new year, when the mayor is required to unveil his first executive budget.

Adams recently appointed two former employees of the city comptroller’s office to help run audit and compliance functions, with plans to examine spending at the Department of Education and the New York City Housing Authority.

“If you don’t inspect, what you expect is suspect,” Adams said Dec. 28.