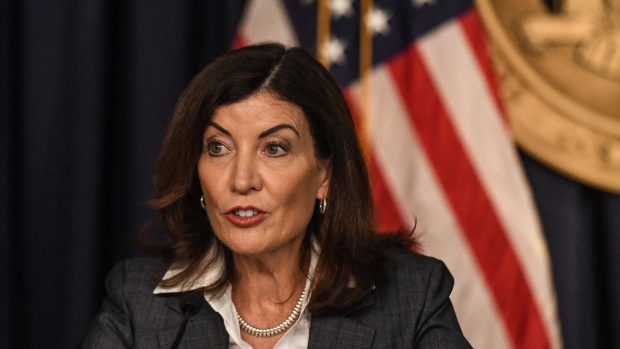 (Bloomberg) -- New York Governor Kathy Hochul called on the Biden administration to present a “federal solution” to the influx of thousands of migrants that are being bused from border states, saying the state can only do so much.

“I’ve raised this with the White House,” she said during an interview Tuesday with Bloomberg Television’s David Westin. “Let’s look at federal facilities, federal staff to help supplement the city.”

Hochul said she has been working “almost hourly” with New York City since the migrants began arriving to make sure the issue doesn’t “get out of control.”

New York City Mayor Eric Adams on Monday night said the city had to abruptly halt the building of an emergency tent in the Bronx aimed to house recently arrived migrants before it even opened. Citing the risk of flooding, Adams said the city would open a tent on Randall’s Island after a weekend of storms that led advocates to raise fresh concerns about the original location.

Hochul is roughly a month away from November’s gubernatorial election, where she’s leading the polls against her Republican challenger, US Representative Lee Zeldin. With 54% to Zeldin’s 37% in the latest Siena College poll, Hochul is ahead but spending millions of dollars in advertisements to fend off Zeldin.

The Buffalo, New York, native took over as governor last year after former Governor Andrew Cuomo resigned over sexual harassment allegations. Back then, the state’s economic picture was rosier, tax collections were higher than anticipated, and New York passed the largest ever state spending plan. Now, Hochul and other public officials are girding for a downturn.

Hochul said the state was positioned well for a potential recession. “Even though the skies were sunny last January when we did our budget, I also knew we had to be prepared for a rainy day,” she said, citing reserves of as much as 15% that can be used to help stabilize the state’s finances should the economy falter.

She also pledged not to raise taxes, continue to fight a pandemic-induced spike in crime, and to keep positioning the state as a business-friendly destination, citing a $100 billion chip factory announced on Tuesday by Micron Technology Inc.

Read More: Micron Plans to Invest Up to $100 Billion in NY Chip Factory