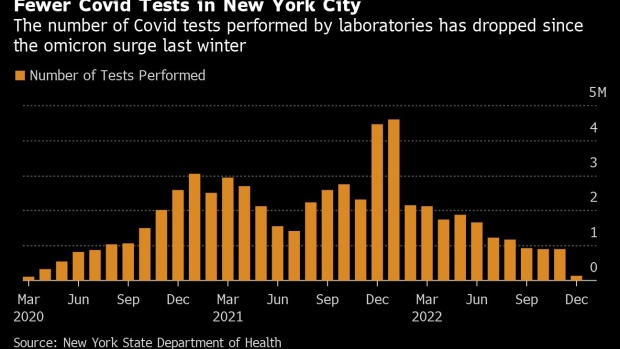 (Bloomberg) -- New York City’s Pandemic Response Lab, a much-vaunted effort to increase Covid-19 testing capacity at the height of the pandemic, will close at the end of the month and eliminate all 185 jobs.

ReOpen Diagnostics, the subsidiary of the laboratory automation company Opentrons Labworks Inc. that runs the Queens lab, said Monday it was winding down operations because of a “rapidly changing external environment.”

The elimination of testing capacity follows a global decline in demand for Covid tests, a trend that could limit the ability of public health officials to track new variants and outbreaks, the World Health Organization has warned.

Fewer than 1 million Covid tests were performed by laboratories in New York City last month, according to state data, down from 4.6 million in January.

The company said it would shift its emphasis to non-clinical labs. Tests currently done by the Pandemic Response Lab will be reassigned to the company’s Neochromosome division.

Employees will remain on the payroll until the end of February, according to a mass-layoff notice filed with the state.

NYC Health + Hospitals spokesman Christopher Miller said its facilities have a network of other providers and sufficient internal capacity, and that the closure wouldn’t affect the turnaround time for Covid-19 testing.

“The Pandemic Response Lab served New York City during our biggest time of need and is a shining example of a public-private partnership coming together during a crisis,” he said.

The laboratory opened in September 2020 with the help of city funding. Then-Mayor Bill de Blasio said the lab would help make New York “a world leader in making testing available to everyone.”

It soon won praise for its robotic technology to speed up lab tests and its ability to detect new variants of the virus through genomic sequencing.

But that technology is expensive, and neither the city nor the insurance companies were paying Opentrons for it.

“It’s a nonrational business decision if you just care about shareholder value,” Opentrons Chief Executive Officer Jon Brennan-Badal told Bloomberg Businessweek last year. “The approach that I took with this is no one is willing to pay for it, but everyone is happy to have it.”

Cases of Covid-19 have been rising steadily in New York since Thanksgiving, according to city data, though they remain far below the levels reached during the height of the omicron wave in early 2022.

The boroughs of Queens, Brooklyn, Staten Island and the Bronx are listed as high risk by the US Centers for Disease Control and Prevention. Manhattan is listed as medium risk.