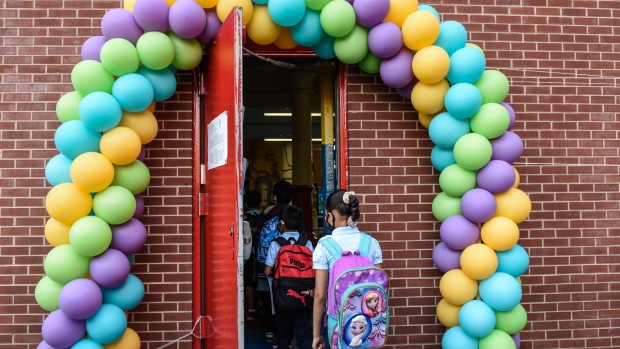 Students arrive on the first classes at a public school in the Bronx borough in New York on Sept. 13. Photographer: Stephanie Keith/Bloomberg , Bloomberg

(Bloomberg) -- New York City’s requirement for teachers to be vaccinated was cleared by a state judge following a legal challenge from labor unions.

New York State Supreme Court Justice Laurence L. Love removed a temporary restraining order he had imposed to stop the vaccine mandate from being enforced while the case is being litigated. Love dismissed the unions’ argument that the mandate violates the due process rights of teachers and staff, saying state and federal courts have “consistently held” that a mandatory vaccine requirement doesn’t impede such rights and is within the government’s power.

The judge said the unions were “similarly unlikely to be able to establish an irreparable harm as the loss of employment is compensable by money damages and reinstatement to said employment and will be similarly unable to prevail in a balancing of the equities as the health interests of the general public far outweigh petitioners’ interests.”

Love said he had issued the TRO because the mandate “did not reference the possibility of any medical or religious exemption.” The day after he imposed the restraining order, the city reissued the mandate with language making it clear that it would provide for “reasonable accommodations otherwise required by law.”