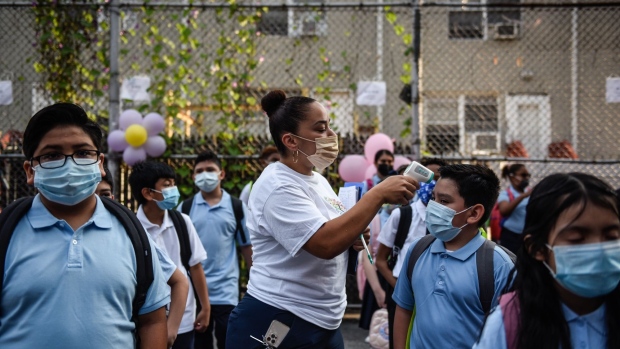 A teacher takes the temperature of students arriving on the first classes at a public school in the Bronx borough in New York, U.S., on Monday, Sept. 13, 2021. For the first time since the beginning of the Covid-19 pandemic, all of New York City’s public school students are expected to return to classes in person on Monday. Photographer: Stephanie Keith/Bloomberg , Bloomberg

(Bloomberg) -- The presidents of New York City’s teachers and principals unions urged Mayor Bill de Blasio to push back his Tuesday deadline for staff to be vaccinated against Covid-19, warning it will result in employee shortages that will imperil the safety of children.

Michael Mulgrew, president of the United Federation of Teachers, and Mark Cannizzaro, president of the Council of School Supervisors & Administrators, said they are urging the delay because the district has no plan to redeploy substitutes and central office employees to hundreds of schools with high absentee rates of educators and maintenance staff.

“We are concerned, very very concerned,” Mulgrew said during a Friday news conference. “They’re putting us in a situation where we will have children, thousands of them, in an unsafe situation.”

The battle between the unions and City Hall is the latest chapter in the reopening of the largest U.S. school system. The fight may be a preview of challenges to come for school districts and other employers as they move to impose vaccine mandates on workers.

De Blasio said Friday that the city still has plenty of time to prepare and estimated that many still unvaccinated employees will get the shot by Monday’s midnight deadline. The city can deploy thousands of substitute teachers and central education department staff if necessary, he said.

“A lot’s going to happen between now and Monday; if we need thousands we’ll have thousands,” de Blasio said Friday during an interview on WNYC radio, predicting more compliance in the next few days and indicating no plans to shift the deadline. “As of Tuesday, the only adults who will be in a school building will be people who are vaccinated.”

Mulgrew said at least 100,000 of the city’s approximately 1 million students have remained at home since the start of classes, though the actual number isn’t known for certain because the city’s education department hasn’t released enrollment figures. Nor have school officials told the unions which schools have the most unvaccinated personnel.

“The fact that they are hiding that just shows you it’s not about the children; it’s about whatever politics they’re playing,” Mulgrew said. “They are not making decisions based on what is going to happen inside the schools.”

Cannizzaro said principals have told him some schools expect 30 to 100 missing personnel that will need to be replaced on short notice Tuesday. The mayor should have set a deadline for the vaccine mandate ahead of schools’ opening, or at least allow several days to find replacements for those who won’t be allowed to work, he said.

“Principals were told yesterday that school safety agents would be redeployed and schools would probably get one safety agent per school,” Cannizzaro said. “Can you imagine an emergency evacuation drill with one safety agent?”

Custodial staff will also be affected, said Robert Troeller, president of the International Union of Operating Engineers Local 891, which represents them. He said school officials have told him that only about 180 of 820 members of have been inoculated. That’s probably a severe undercount, Troeller said, yet he said he’s been dealing with a labor shortage of custodial staff for months.

De Blasio’s executive order requires all of the city’s education department employees, as well as contractors, to provide proof of at least a first dose by midnight Monday. Those who fail to do so will be removed from payroll and placed on leave. That gives principals just hours to find replacements for the missing personnel.

About 87% of teachers and 80% of department employees were vaccinated as of Wednesday, according to a tweet from Danielle Filson, the department’s press secretary. The supervisor union’s Cannizzaro said well over 90% of his members had been dosed, while Mulgrew said he believed teacher rates were somewhere between 90 and 95%.

The department says the vast majority of employees are vaccinated and that rates will continue to rise over the coming days. “We administered 7,000 vaccinations on school campuses across the city last week, hired thousands of new teachers and staff, and have a large reserve of qualified workers who are ready to fill in if needed,” said Katie O’Hanlon, a department spokeswoman.