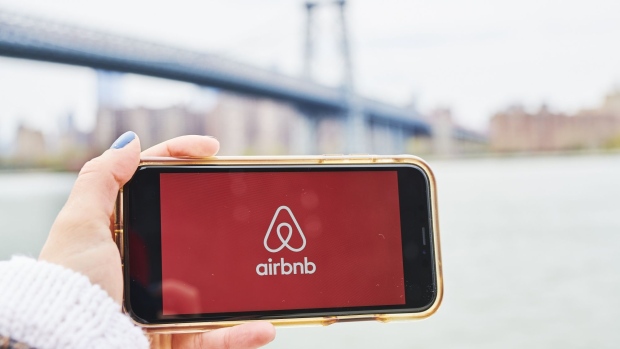 AirBnb Inc. signage is displayed on an smartphone in an arranged photograph taken in the Brooklyn borough of New York, U.S., on Friday, April 17, 2020. Home-sharing leader Airbnb Inc. lined up $1 billion in debt boosting a financial cushion it can use to grow and pay bills as the global coronavirus pandemic crushes demand for travel and diminishes the prospect of an initial public offering. Photographer: Gabby Jones/Bloomberg , Bloomberg

(Bloomberg) -- New York City officials held a lively public debate with property owners on Monday over proposed changes to short-term rental laws that will make it much harder for hosts to list their apartments on Airbnb Inc. and other platforms.

Mayor Eric Adams’s Office of Special Enforcement outlined coming legislation that will more strictly enforce some existing laws and also add tough new measures. Hosts will be required to register their properties with the city, including names of all permanent occupants and their relationship to the applicant, and submit a detailed diagram of the listing, designating which parts will be used for the rental and highlighting fire exits, among other requirements. Tenants who are leasing must also provide a lease, and applicants need to submit a government ID along with documents that show proof of occupancy. The measure will also prohibit Airbnb and other platforms from processing payments for listings that are not registered.

San Francisco-based Airbnb has long sparred with New York, one of its biggest domestic markets, where short-term rental rules are among the most restrictive in the country and essentially prohibit rentals of most apartments for fewer than 30 days without the owner present. City officials have argued that illegal rentals can be dangerous, take property off an already strained market and only push prices higher. Airbnb says the rentals provide people with a much-needed source of extra income in an expensive real estate landscape, a position many hosts seemed to validate.

“My social security and pension does not cover my cost of living and without this income from the short-term rental, I would not be able to pay my mortgage and I would lose my home,” said Aimee Thrasher, a Queens-based Airbnb host, at the hearing.

For weeks, hosts have been submitting comments on the Office of Special Enforcement’s site, calling the proposed rules onerous and saying they would likely force them to delist their property. Of more than 230 respondents on the site, many discussed how the short-term rental regulations on single-family homes would restrict their ability to pay mortgages and other bills. Others were in favor of the new registration system, citing apartment units that are currently being run like illegal hotels and the ability for co-op owners to place their building on a prohibited listings list.

Some hosts were particularly disgruntled over one part of the existing legislation that prohibits a rentee from having a key to lock their room behind them.

“I have no issues with registration, just the restriction of the use of locks or separation of living spaces,” said Mike Harp, a Brooklyn-based host, speaking at the hearing.

The city has been determined for years to crack down on thousands of illegal listings across the five boroughs. New York has has close to 24,000 active short-term rentals on online platforms, including Expedia Group Inc.’s Vrbo, according to industry data provider AirDNA.

The Office of Special Enforcement has been stepping up its regulation of short-term rentals since the city and Airbnb reached a settlement in 2020 requiring the company to share information about its listings with the city on a quarterly basis. The legislation that takes effect in January goes further.

Over the summer, the mayor’s office sued an operator of a multimillion-dollar illegal Airbnb operation in Manhattan. The Southen District of New York also charged a Florida man self-described as the “Wolf of Airbnb” on wire fraud counts after he allegedly ran an illegal Airbnb hotel scheme and stiffed landlords on lease payments.

“Currently as is, this is an entirely unregulated market and the consequences have been disastrous for New Yorkers,” said New York State Assembly Member Zohran Mamdani, at the hearing.

The Office of Special Enforcement will review the comments and feedback before the final law goes into effect in January. Hosts could be fined as much as $5,000 for noncompliance, and Airbnb could be on the hook for $1,500 per violation.