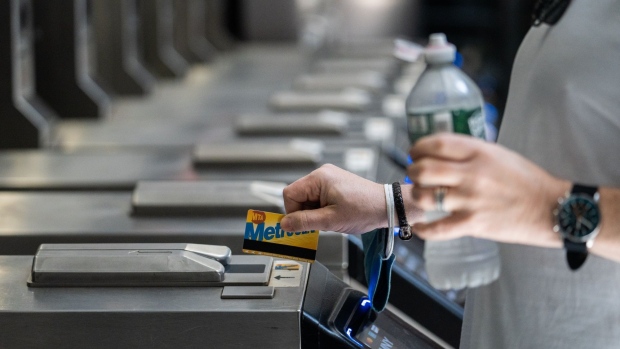 An empty subway car in New York, US, on Thursday, June 30, 2022. The head of New York's Metropolitan Transportation Authority warned the agency's anticipated $2 billion budget gap may widen in 2026 as it struggles to win back riders. Photographer: Jeenah Moon/Bloomberg , Bloomberg

(Bloomberg) -- New York’s Metropolitan Transportation Authority may boost fares on subways, buses and commuter rail lines by 5.5% next year, the first time the transit provider has implemented such a hike since 2019.

The MTA is the largest mass-transit system in the US and faces a potential $3 billion budget deficit in 2025 as weekday ridership has plateaued to about 60% of pre-pandemic levels. To help raise additional funds, the MTA may increase fares by 5.5% in 2023, higher than the anticipated 4% boost, Kevin Willens, the MTA’s chief financial officer, said during the agency’s monthly board meeting on Wednesday.

The MTA tends to increase fares by 4% every two years, but Governor Kathy Hochul postponed those hikes during the pandemic. The MTA, in the past, has approved fare increases during its February meetings.

The potential boost comes as the agency is seeking additional federal, state or city funding to help fill budget deficits. The MTA may be able to avoid a fare increase if the agency gets enough government funding, Janno Lieber, the MTA’s chief executive officer, told reporters after Wednesday’s board meeting.

“If they also want to help us come up with an answer that makes the fare hike unnecessary, we’re all ears,” Lieber said. “But obviously we’re trying to be responsible by putting on the table -- as they have in past existential budget crises for the MTA -- an approach on the fare issue that is moderate and designed to protect the riders.”