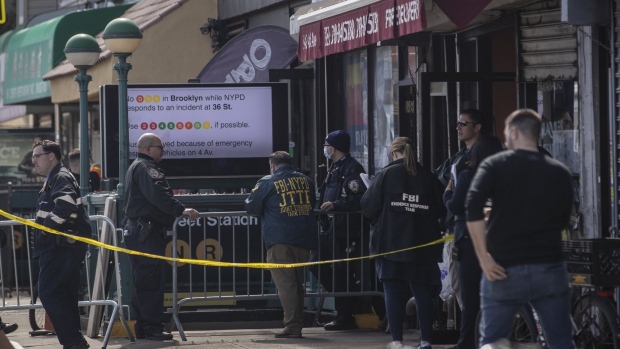 Law enforcement officers at the scene of a shooting at the 36th Street subway station in the Sunset Park neighborhood in the Brooklyn borough of New York, U.S., on Tuesday, April 12, 2022. A New York City shooter remains at large after 16 people were injured, including 10 people with gunshot wounds, during a chaotic Tuesday morning-rush-hour incident at a subway station in Sunset Park, Brooklyn. , Bloomberg

(Bloomberg) -- Glock Inc. said a suit brought against it by a New York woman wounded in an April subway shooting should be dismissed under a federal law shielding gunmakers from liability.

The company on Tuesday sent a letter to US District Judge Diane Gujarati in Brooklyn, New York, saying it intended to file a motion to dismiss Ilene Steur’s case because the 2005 Protection of Lawful Commerce in Arms Act, or PLCAA, granted it immunity from suits over crimes committed with its products.

Steur was one of 10 people shot when Frank James allegedly opened fire with a Glock pistol aboard a crowded morning rush-hour subway train near Brooklyn’s Sunset Park section. James, 62, has pleaded not guilty to federal terrorism and gun charges. Prosecutors say he set off smoke cannisters and then fired his weapon at least 33 times inside the crowded subway car.

Severely wounded in her buttocks, Steur sued the gun maker and its parent company in May, alleging they were aware that the pistol’s product design “promotes concealment” and allows a user “to inflict unparalleled civilian carnage.”

Steur took advantage of a 2021 New York law intended to bypass PLCAA and make it easier to sue gunmakers in the state. She said Glock violated the new law because it “knew, or should have known” its pistol would come into possession of someone like James.

But Glock said Steur’s claim was invalid because James legally purchased his gun in 2011, more than a decade before the New York law went into effect. The gunmaker could not have “knowingly” violated a law that wasn’t in effect at the time, Glock said.

Gunmakers’ protection under PLCAA has been increasingly tested by mass shooting victims and their lawyers, with courts upholding a number of claims.

The case is: Steur v Glock Inc, 22-CV-3192, US District Court for the Eastern District of New York (Brooklyn).