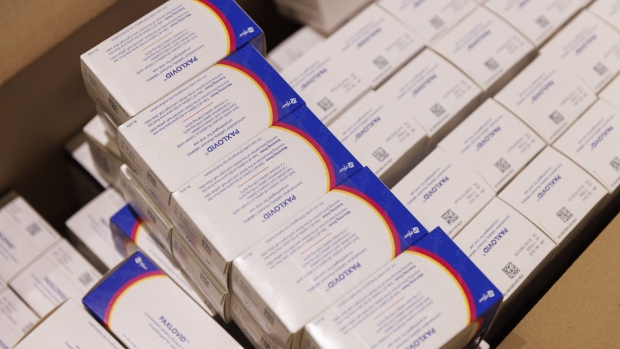 Boxes of Pfizer Inc.’s Paxlovid antiviral medication in a warehouse in Shoham, Israel, on Jan. 18, 2022. A fourth dose of the Pfizer-BioNTech vaccine was insufficient to prevent infection with the omicron variant of Covid-19, according to preliminary data from a trial in Israel released Monday. , Bloomberg

(Bloomberg) -- New York City will start offering Pfizer Inc.’s Covid antiviral Paxlovid at “first of its kind” mobile test-to-treat sites across the city, providing immediate treatment for those who test positive for the virus.

Initially, mobile sites will be stationed outside of pharmacies in Inwood, South Ozone Park and the East Bronx, and will expand to 30 locations by the end of July, Manhattan’s Borough President Mark Levine said on Twitter Thursday. People who test positive for Covid and qualify for Paxlovid will be able to get a prescription on-the-spot, which they can take to a nearby pharmacy to pick up the drug. By the end of the summer, officials plan to bypass pharmacies entirely, offering Paxlovid directly through the mobile sites.

The new initiative aims to address some of the equity issues in who is getting Paxlovid and will help bolster access for people most at-risk of developing severe disease, New York City Mayor Eric Adams said during a press conference. Adams was joined by Ashish Jha, the White House Covid response coordinator, in Inwood to announce the mobile testing sites earlier.

“We were the epicenter of the Covid pandemic at the start, but we’re leading the way in prevention and mitigation,” Adams said during the press conference. “What we’re doing here other cities can look at to make a determination of how they want to address Covid.”

Jha touted the country’s progress in reducing Covid deaths, despite there still being more than 100,000 infections each day -- a number that’s likely an undercount due to at-home testing. Over the last two months, Jha said, there’s been a huge increase in the use of Paxlovid which has played a key role in keeping hospitalizations and deaths low. However, he said the use of Paxlovid lags in communities of color and neighborhoods of “high social vulnerability.”

“This will become a national model,” Jha said. “Once New York begins to do this on a regular basis, it makes it easier for folks like me to talk to mayors and governors across the country.”

Earlier on Thursday, Pfizer asked US regulators for full approval of Paxlovid for people at high risk of developing severe disease, bringing the drugmaker one step closer to securing a formal clearance that would allow it to sell and market the antiviral outside of the public health emergency.