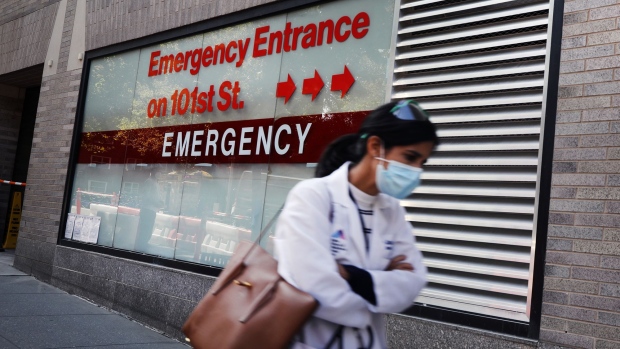 A person walks past an "Emergency Entrance" sign at Mount Sinai Hospital in Manhattan, which has treated hundreds of COVID-19 patients since March, on September 22, 2020 in New York City. , Photographer: Spencer Platt/Getty Images

(Bloomberg) -- New York City will begin requiring vaccinations or weekly testing of all workers for the Covid-19 virus in its public hospitals and clinics, Mayor Bill de Blasio said Wednesday.

“It’s time to do something new,” de Blasio said during an MSNBC interview. “We’re saying get vaccinated or get tested once a week. It’s a fair choice.”

The continued climb in cases of the virus and the emergence of the highly contagious delta variant has prompted the policy change, de Blasio said. The city reported a seven-day average of 576 confirmed and probable cases on July 18, more than double the level on July 6.

About 70% of the city’s hospital workers are vaccinated, according to the state Health Department. That includes employees of both public and private hospitals.

Meanwhile, the city’s vaccine administration rate has plunged to less than 15,000 a day, from more than 100,000 a day in mid-April, as cases increase. The city has fully vaccinated 4.5 million residents, data show, falling short of the mayor’s goal of having 5 million New Yorkers fully vaccinated by June.

Only about half of the 22 million health care workers in the U.S. have been vaccinated, the mayor said. He added that city officials are weighing whether to adopt a similar policy for teachers and staff when schools open in the Fall.

“We keep moving this in phases as much as possible, getting more and more people acclimated to vaccination,” de Blasio said. “Starting with our health-care workers here’s a very fair choice. I think it will move a lot of people to get vaccinated, and others over time.”