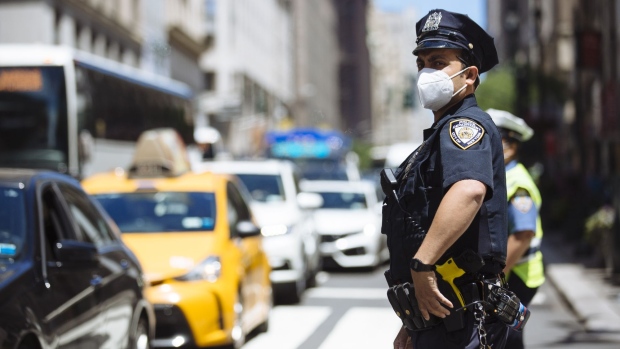 A New York City Police Department (NYPD) officer wearing a protective mask directs traffic in the Midtown neighborhood of New York, U.S., on Wednesday, June 17, 2020. With two weeks to get City Council approval of a spending plan that plugs a $9 billion revenue gap in the next two years, Mayor Bill de Blasio faces renewed calls to slash more than $1 billion from the NYPD. , Bloomberg

Mayor Eric Adams on Wednesday said the city was launching a multimillion-dollar ad campaign to highlight a new slate of pedestrian safety initiatives and a new traffic rule requiring cyclists and drivers to come to a complete stop at all intersections, including those without traffic signals or stop signs. He said the New York Police Department would also step up enforcement of traffic violations, focusing on 1,000 of the city’s most dangerous intersections.

Last year, New York City experienced the highest level of traffic fatalities in nearly a decade. To that end, the city’s transportation department plans to add improved traffic signals, raised crosswalks, and other expanded pedestrian spaces at intersections, where Adams said half of pedestrian fatalities and 70% of injuries occur.

“People must learn the rules of the road or get off the road,” Adams said in a press briefing on Wednesday, without providing a time line for the changes. “The cornerstone of my administration is about creating a safe city for New Yorkers.”

The corresponding campaign, called “Stop, Let Them Cross,” will increase awareness about the new traffic rule and inform the public about best practices for pedestrian and vehicle safety. The NYPD also plans to double the number of enforcement efforts in 2022 from the year before for “failure-to-yield,” a violation levied for endangering pedestrians and cyclists.

Officials said the city wouldn’t add additional officers but that cops would now be charged with enforcing traffic violations when they see them.