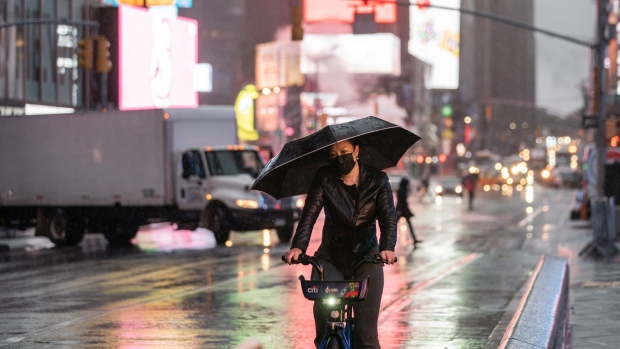 A bicyclist during a rain storm in the Times Square neighborhood of New York. Photographer: Jeenah Moon/Bloomberg , Bloomberg

(Bloomberg) -- Get ready for a little weather whiplash in Manhattan and the chance of some rain in drought-starved California.

New York City could see a few blustery snowflakes flying around later Wednesday, though by Saturday temperatures could climb to 60 degrees Fahrenheit (16 Celsius) or warmer in Central Park, said Rob Carolan, owner of Hometown Forecast Services, which provides outlooks for Bloomberg Radio. The warm air will probably come with some rain in New York.

“The city looks mild on Saturday and Sunday looks like it could be a decent day,’’ Carolan said. “It is certainly an anomalous pattern for this time of year.’’ The roller coaster of temperatures isn’t isolated to the East Coast: St. Louis will drop to 35 degrees Wednesday and reach a high of 70 degrees by Friday, Carolan said. Cold water in the Gulf of Alaska and a wave of unsettled weather called the Madden-Julian oscillation have led to a pretty persistent ridge of high pressure across the central U.S. that is helping keep temperatures up.“It’s going to get ridiculously warm in the middle of the country,’’ Carolan said.While all this is going on, there looks like a powerful rainstorm may nose its way into California, which is something the drought-stricken state needs. It has been weeks since California had its last appreciable rain and that downpour was focused mainly on northern sections of the most populous U.S. state. This new storm has the potential to bring rain from the north to the south, and it could also drop some snow on the Rocky Mountains, Carolan said.“There are some interesting changes to take place,’’ he said.