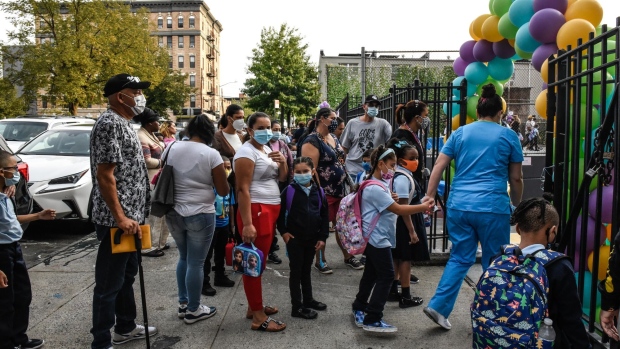 Students arrive with their parents on the first classes at a public school in the Bronx borough in New York, U.S., on Monday, Sept. 13, 2021. For the first time since the beginning of the Covid-19 pandemic, all of New York City’s public school students are expected to return to classes in person on Monday. Photographer: Stephanie Keith/Bloomberg , Bloomberg

(Bloomberg) -- New York City Mayor Bill de Blasio said schools will implement weekly testing of students for Covid-19, instead of once every other week, after 77 classrooms were closed and one school was shut down school due to the virus.

The step, announced by the mayor during a briefing Monday, follows pressure to step up testing from United Federation of Teachers President Michael Mulgrew, who said in a letter Sunday that fewer than half of the city’s more than 1,800 schools had been tested during the first week of the school year.

The city was forced to shut down P.S. 79, a special education school in Manhattan, because of the coronavirus.

Citywide, 77 classrooms have been shuttered and 60 more were partially closed, according to the Education Department.