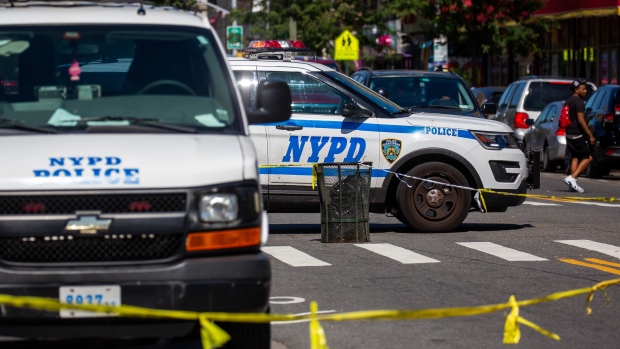 NYPD vehicles parked in front of a crime scene in the 73th precinct in the Brownsville neighborhood in the Brooklyn borough of New York, U.S., on Sunday, Sept. 19, 2021. In fiscal 2020, New York City police officers logged more overtime hours than any other big city in the U.S., and violent crime rates still went up. Photographer: Michael Nagle/Bloomberg , Bloomberg

(Bloomberg) -- The New York City Police Department failed to meet cost-savings targets and refused to provide employee pay information for an audit, a report from the city comptroller found.

Comptroller Brad Lander, who took office at the beginning of the year, released his first audit on Friday -- an investigation into the NYPD’s progress in moving administrative tasks and other non-patrol functions out of the hands of police officers. The audit, which was conducted during the last administration, found the nation’s largest police department set a goal of moving 415 positions out of the purview of uniformed police by fiscal 2017, but didn’t do so until March 2019.

Further, the department refused to provide certain information to auditors, including a list and pay scale for employees, making it impossible to assess progress. Moving positions into civilian hands is a way for the department to both cut costs and free up resources for actual police work. A study cited in Lander’s report found the process could save nearly $25 million a year.

“Police officers are trained for challenging jobs on the streets of our city, yet far too often we rely on them to do tasks that they are not well-equipped to do, or that are not good uses of their training,” Lander said in a statement. “Paying uniformed, armed police officers to perform administrative duties that could be handled by civilian employees wastes resources that could be better utilized to improve community safety for New Yorkers.”

Lander’s office recommended that the NYPD keep better records, make moving these roles into civilian hands a management priority and increase its transparency.

Representatives for the NYPD didn’t immediately respond to a request for comment.

The department is one of the city’s largest agencies. Its budget for this fiscal year is more than $5 billion, and for more than two decades it has exceeded its allotted budget by hundreds of millions of dollars.

This week, Mayor Eric Adams said he would consider excluding the police department from a citywide cost-cutting measure that he’s implementing across all government agencies. Instead, he said the department needs to allocate staff more efficiently.