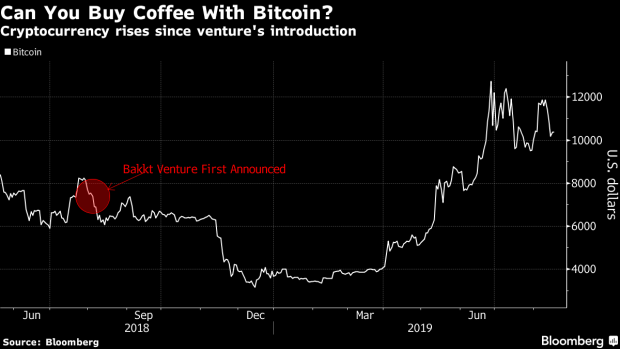 (Bloomberg) -- Intercontinental Exchange Inc., the parent of the New York Stock Exchange, won an approval from New York regulators that clears the way for its Bakkt unit to allow investors to buy derivatives that pay out with Bitcoins for the first time.

The New York State Department of Financial Services on Friday granted a charter to Bakkt Trust Co. The futures had already been given a green light by the U.S. Commodity Futures Trading Commission under a self-certification process. The first contracts will be offered Sept. 23, according to a blog post.

“We believe that the availability of a benchmark that can be referenced globally will create confidence in the true price of Bitcoin,” Kelly Loeffler, Bakkt’s chief executive officer, said in a telephone interview. “It’s an important step in creating more trust.”

ICE’s plan is to create an ecosystem that would encourage pension funds, endowments and other institutions to invest more money in cryptocurrencies, and make it much easier for consumers to buy products with the cryptocurrency. The venture, announced to much fanfare in August 2018, has lined up big-name backers, including Starbucks Inc. and Microsoft Inc.

The goal is to have Bakkt serve as backbone of digital payment infrastructure at retailers starting in 2020, Loeffler said.

Bitcoin erased losses of as much as 6% to trade little changed at about $10,400 after the announcement. The largest cryptocurrency has dropped about 13% this week. It traded around $7,400 when the the venture was first announced.

Bakkt Bitcoin futures contracts won’t rely on unregulated spot markets for settlement prices, thus serving as a transparent price discovery mechanism for the benchmark price for Bitcoin, the company said in a statement.

Bakkt’s Bitcoin futures will be exchange-traded on ICE Futures U.S. and cleared on ICE Clear US, which are federally regulated by the CFTC. Regulated exchanges differ from trading platforms, such as crypto spot markets in many respects, including risk management, compliance and market surveillance.

--With assistance from Olga Kharif.

To contact the reporter on this story: Ben Bain in Washington at bbain2@bloomberg.net

To contact the editors responsible for this story: Jeremy Herron at jherron8@bloomberg.net, Dave Liedtka, Gregory Mott