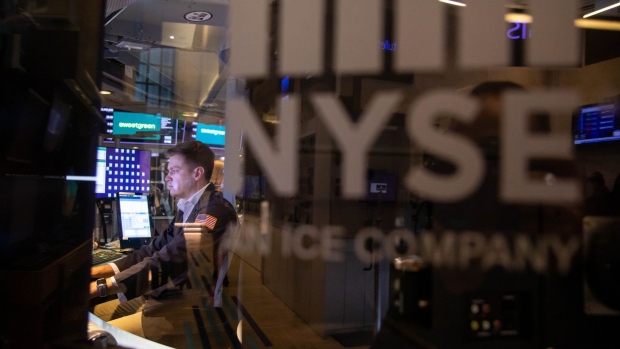 A trader during the Sweetgreen initial public offering (IPO) in front of the New York Stock Exchange (NYSE) in New York, U.S., on Thursday, Nov. 18, 2021. Sweetgreen Inc., perhaps the most well-known of the salad chains, is capitalizing on the reopenings, and the booming market for new listings, with an initial public offering that’s surpassed expectations. , Bloomberg

(Bloomberg) -- The New York Stock Exchange said some trades will be declared “null and void” after a glitch caused hundreds of securities to commence trading on Tuesday without an opening auction price.

The exchange said transactions in a swath of stocks will be reviewed as “clearly erroneous” under NYSE rules. That applies to trades in certain securities that did not conduct an opening auction, that occurred after the 9:30 a.m. bell but before certain thresholds were set that normally limit haywire swings, and that were executed too far from the reference price.

In an updated statement on its website several hours after the debacle rattled Wall Street, the exchange identified more than 250 stock symbols that were affected. It also noted when it received key thresholds — known as limit-up, limit down bands — and the price range above or below which executions “will be busted.”

The NYSE didn’t elaborate on what prompted what it called a “system issue” as the session began, nor did it say how much it may ultimately cost.

“Such events are extremely rare, and we are thoroughly examining the day’s activity to assure the highest level of resilience in our systems,” NYSE Chief Operating Officer Michael Blaugrund said. “We ended the day with a normal market close and expect a regular open on Wednesday.”

The glitch set off wild swings and trading halts, causing dozens of the biggest US companies to plunge or spike — in some cases veering 25 percentage points between a high and low in a matter of minutes. Banks, retailers and industrial companies were among those affected, including Wells Fargo & Co., McDonald’s Corp., Walmart Inc. and Morgan Stanley.

Yet the amount of stock traded at away-from-market prices was just a tiny fraction of the usual volume in stocks that normally see millions of shares change hands each day. In companies like McDonald’s and Verizon Communications Inc., a few thousand shares went off at prices well above or below the last trade. Others like Nike Inc. and Exxon Mobil Corp. saw millions of dollars of stock move, data compiled by Bloomberg show.

The freakish action bore hallmarks of past episodes in which computer malfunctions led to sudden price distortions. A US Securities and Exchange Commission spokesperson said the agency is looking into the matter.

The chaos erupted just after the opening bell.

R.J. Grant, who oversees trading at KBW and handles Morgan Stanley’s shares, saw eight alerts pop up simultaneously, notifying him that the price had tumbled more than 10% within minutes. His firm didn’t have any big orders on the stocks affected, but it was inundated with calls from clients, analysts and sales employees trying to figure out what went awry.

“It was optically wild and very evident that something was wrong,” Grant said. “If those stocks would have opened up at that price and kept trading, it would have been a mad dash for people to try and buy things that were down dramatically.”

The distortions ripped through trading of Morgan Stanley, which closed Monday at $97.13 and then fell as low as $84.93 on Tuesday, before making up lost ground. Wells Fargo similarly plunged to $38.10, down from $45.03 on Monday, before bouncing back.

Walmart and McDonald’s were up and then down as much as 12% before reverting to more normal trading ranges. By late in the session, the broad stock indexes were little changed.

Transactions occurred in NYSE-listed securities and took place on other platforms, including ones overseen by Nasdaq Inc., CBOE Global Markets and private venues reporting to the Finra trade reporting facility.

The start of trading in most American stocks involves a complicated but usually routine process called the opening auction, designed to limit volatility resulting from orders for shares that pile up before the start of the regular session. In it, a computer balances out supply and demand for a particular stock by establishing an opening price that can be viewed as the level that satisfies the largest possible number of traders.

The NYSE’s statement makes reference to a system in the U.S. stock market designed to thwart mistaken trades known as “limit up/limit down.” It halts trading when stocks swing drastically from prevailing prices, levels that computers calculate by keeping a rolling record of average transactions over five-minute intervals. At the start of trading, when no such average is available, a price from the opening auction is normally substituted.

The NYSE invoked its “clearly erroneous” execution rule in voiding some of Tuesday’s initial trades. That rule covers orders executed with “an obvious error in any term, such as price, number of shares or other unit of trading, or identification of the security.”

The exchange also is evaluating marking some trades as “aberrant.” That would exclude those transactions from calculating the day’s high and low prices. Those adjustments will be made to its public data after the close.

Episodes in which computer glitches lead to erratic pricing are rare on American exchanges but not unheard of. Perhaps the most famous was the August 2012 incident in which faulty software employed by one of the biggest market makers, Knight Trading, riddled exchanges with erroneous orders and sent shares swinging around the market.

The event sent Knight spiraling toward insolvency before it was bought out by a coalition of trading firms. Last year, Citigroup Inc.’s London trading desk was behind a flash crash that sent shares across Europe tumbling, while in Canada a software-issue caused a 40-minute outage across three stock exchanges.

Another mid-afternoon incident in May 2010 prompted Nasdaq OMX Group Inc. to cancel trades of 286 securities that fell or rose more than 60%.

The damage from an erroneous price may reach far beyond the trade itself, potentially triggering a variety of responses, such as automated stop-loss or limit orders in brokerage accounts, or adjustments to other hedges or offsetting positions.

That can leave investors with “subsequent new positions that would make no sense if the trades at the bad price did not really happen,” said Gary DeWaal, senior counsel for Katten Muchin Rosenman’s financial markets practice.

For now, market professionals are waiting to learn more about what happened, said Jonathan Corpina, senior managing partner at Meridian Equity Partners, who typically works on the floor of the NYSE.

“Everyone wants to get through the day and know where they stand on their trades,” he said. “Pointing the finger will come out afterwards. Time will tell if NYSE is on the hook for paying for all of this.”

--With assistance from Matt Turner and Lydia Beyoud.