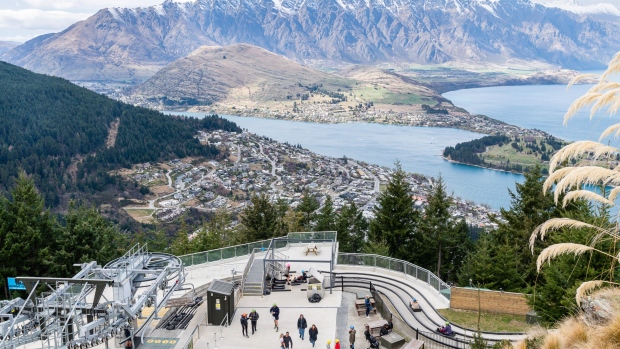 Domestic visitors tend to be more price-sensitive than foreigners, and local operators have been unable to avoid the hit. , Mark Coote/Bloomberg

In a normal year, international tourism is New Zealand’s biggest export — and with its majestic alpine scenery, adventure sports and vineyards, Queenstown is usually booming.

But with the country’s border closed since March 19, there are fewer foreign accents to be heard in the resort town. Bars are shuttered, jet boats sit out of the river for half the week, and one of the area’s biggest ski fields is closed Monday to Friday.

“It was like turning off the key in the ignition of a car, it just stopped,” Queenstown Lakes District Mayor Jim Boult said. “The effect on local business, employment, the local economy has been horrific.”

As the COVID-19 pandemic closes borders and grounds aircraft around the world, iconic destinations from Kyoto to Amsterdam are addressing the new reality of fewer visitors and looking for ways to reset their local economies. In Queenstown, property prices are retreating from record levels and businesses are cutting costs as they brace for a long summer without the influx of European, North American and Asian tourists.

Across the country as a whole, foreign visitors spent NZ$17.2 billion (US$11.5 billion) in the 12 months to March 2019, accounting for 20 per cent of the country’s total exports. Ordinarily, they would spend roughly NZ$1.9 billion a year in Queenstown.

Boult says that the region is running at about 40 per cent of normal in terms of tourist spending, even with more New Zealanders taking the opportunity to visit. Domestic visitors tend to be more price-sensitive than foreigners, and local operators have been unable to avoid the hit. 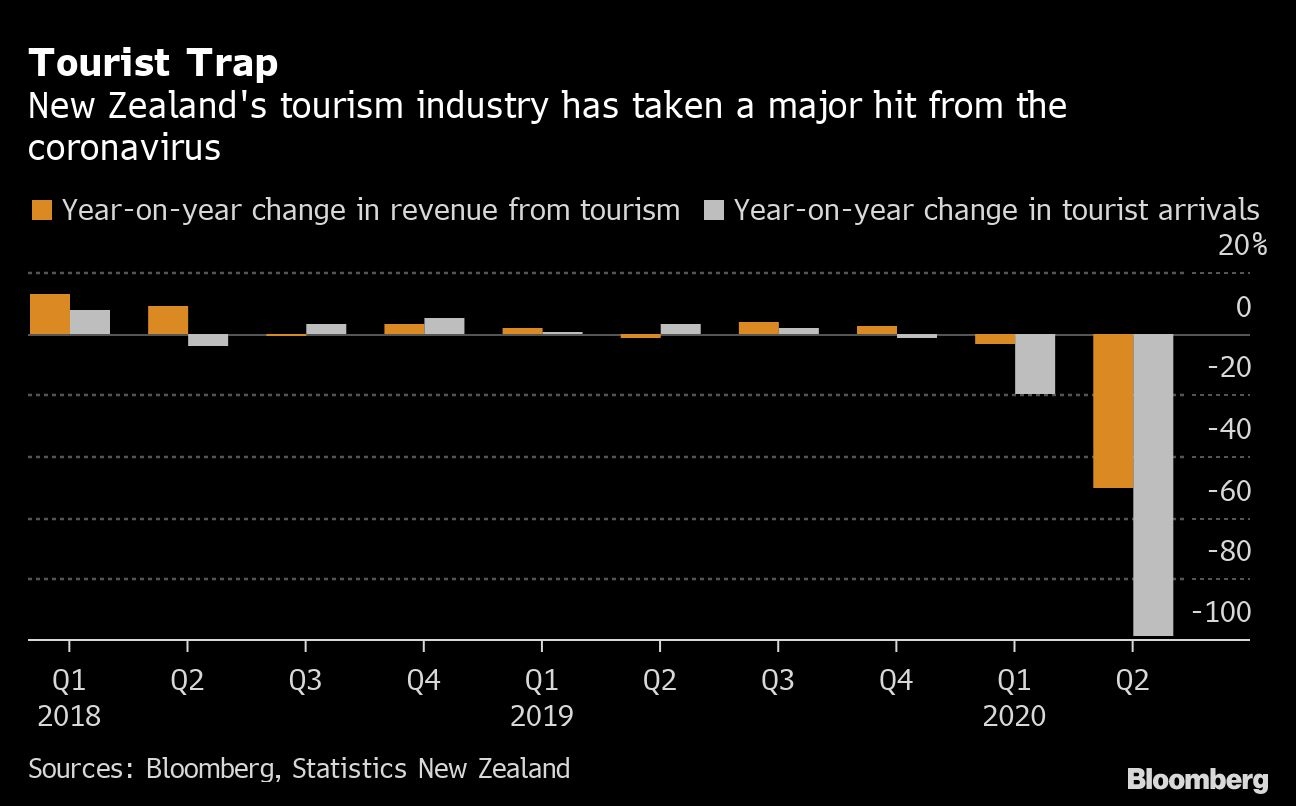 Glenorchy Air Managing Director James Stokes estimates at least 85 per cent of customers on his scenic flights to local beauty spots are international tourists. In their absence, he had to slash prices to attract domestic travelers when the nationwide lockdown lifted in May.

“Straight out of lockdown, prices reduced by 50 per cent. Now they’re down as much as 30 per cent,” he said.

NZ Ski, which owns two of the region’s key ski fields, expects visitor numbers will fall about 30 per cent this season. But revenue may be down as much as 50 per cent because domestic skiers spend less than Australians — who usually make up about a third of visitors — on lessons and equipment hire, Chief Executive Officer Paul Anderson said. In anticipation, the company began the season by halving staff levels, cutting internal costs such as marketing and reducing weekday access to the slopes.

Anderson is bracing for a tough 2021, with the slim chance of some upside if a safe-travel zone can be established with Australia. The “Trans-Tasman bubble” is being worked on by officials although community outbreaks in both nations have delayed implementation.

“If we get the Trans-Tasman bubble and Australians can’t go anywhere but New Zealand, we will be overrun, it will be a very nice problem to have,” he said. “But our planning assumptions are we’re not going to have that.”

Local employers like Anderson are heavily reliant on foreign workers in normal times, particularly for lower paid roles, and staff cuts have left many of them stranded.

There are about 4,000 migrant workers still in the district. At the height of the lockdown in April and May, about three-quarters of the people queuing outside the Salvation Army food bank were from the migrant community, said Andrew Wilson, Director of Community Ministries for Queenstown.

“It has settled a little bit, particularly on food welfare, because people have moved out of town on repatriation or shifting to places where they can secure a lower cost of living, or some form of job,” he said.

But many better-off residents are also having to cope with change, Wilson said.

“There are people who were born here, lived here all their lives, who are in this new rhythm of life,” he said. “It’s a whole new group of people who wouldn’t think they are in financial strife but are now finding themselves in that position and having to navigate the system.”

Meanwhile, Queenstown’s notoriously high cost of living is moderating, with more rental properties on the market as the town has emptied out and former vacation rental businesses have become available to permanent tenants.

“Rents have been lowered to something we can afford,” said Nick Webster, a young Australian worker who arrived in the town in early 2019. “It’s almost ironic that it’s easier to live here than beforehand, and that has taken stress off people.” 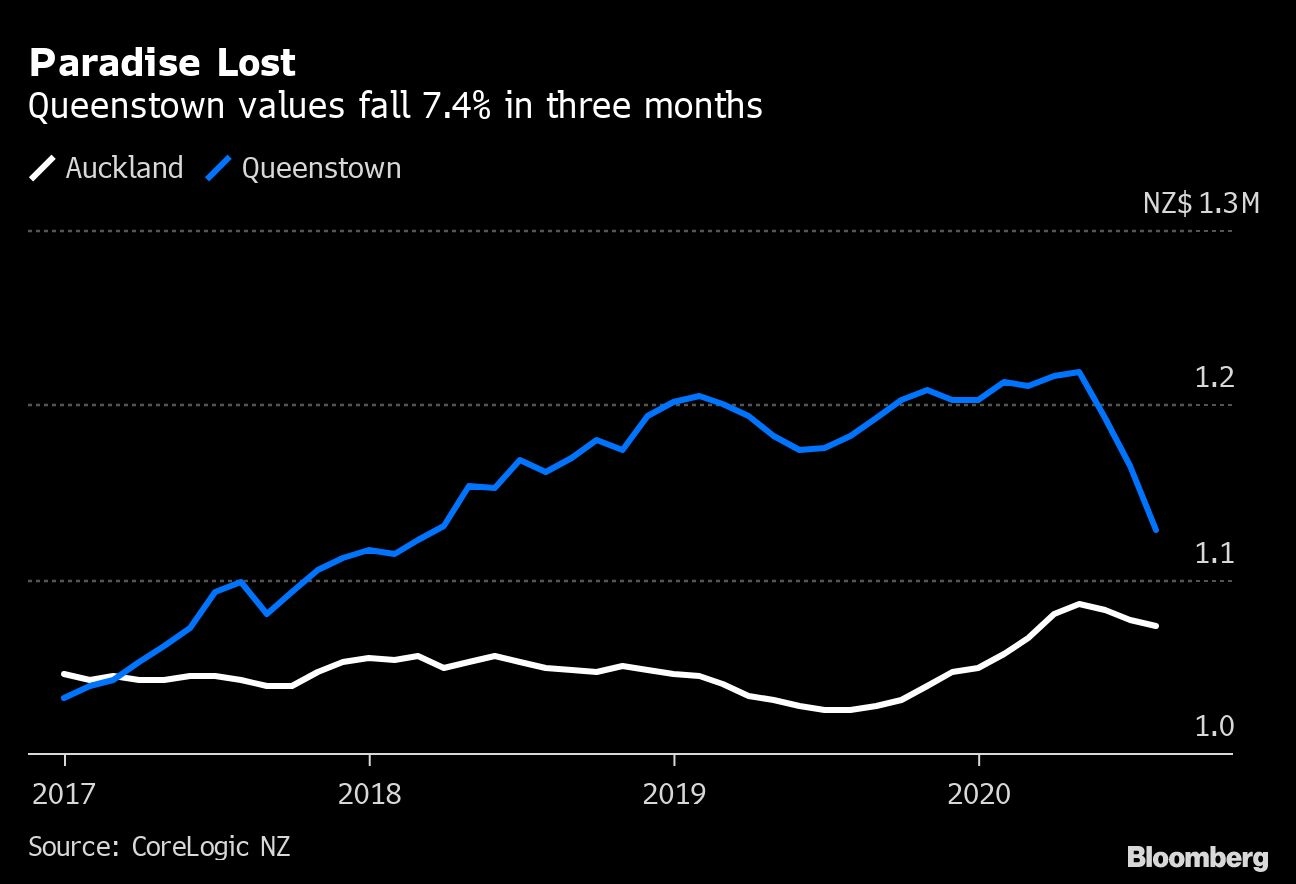 Average property values fell for a fourth month in August and are down 7.4 per cent from a peak in May, according to CoreLogic data. Still, at an average asking price of NZ$1.1 million, the market is expensive for many buyers.

“We haven’t seen a whole lot of distressed sales,” said Bas Smith, co-owner of realtor Ray White Queenstown. “There’s a real maturity in the volume of high-quality buyers coming through and it’s putting pressure on the top end of the market.”

Smith said some owners may be accepting a slightly lower price than before the pandemic, but there is still a strong level of inquiry — particularly from Australian investors and wealthy New Zealanders who have been living overseas but are now looking to move home.

New Zealand’s Treasury expects the country's border to stay closed throughout 2021, although the government says it wants to open it sooner if it’s safe to do so. But with no definitive timeline, the outlook is uncertain.

Mayor Boult is confident his town will get through the near-term impacts, and sees potential for alternative sources of revenue, such as film production or education. But establishing those will take time.

“We are well down track of thinking of ways to diversify income, but you don’t do that overnight. Looking at models around the world, it can take 10 years to turn the ship only a few degrees.”

In the meantime, he is preparing for a new reality with fewer people traveling long distances.

“There was a lot of talk of over-tourism, but now how keen are people going to be to get on long-haul aircraft?” he said. “If we see fewer folk flying, will we reach the nirvana of more higher-value tourists but less of them?”