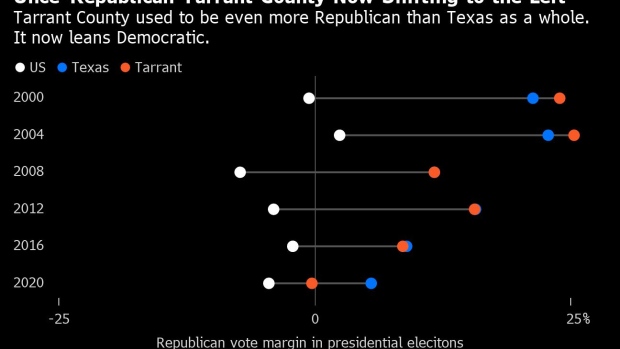 (Bloomberg) -- Beto O’Rourke’s best hope for becoming Texas’s first Democratic governor in almost three decades runs through a county where ultra-conservatives are remaking education with book bans and limits on teaching about racism.

Welcome to the changing terrain of Tarrant County, home of Fort Worth and a Republican stronghold for decades that has been slowly morphing into a place where Democrats can be competitive. Transplants from liberal bastions like Los Angeles and Chicago are now arriving to the county of 2.1 million people in big enough numbers to make a difference, and some locals who used to vote GOP say they’re increasingly uncomfortable with the culture-war rhetoric.

Gretchen Veling, a 49-year-old accountant and mother of two sons, is the kind of voter O’Rourke is hoping he can count on. She grew up in North Texas surrounded by people who voted Republican and found herself doing the same after she settled in Keller 21 years ago. But lately she’s shifted toward Democrats, largely because their positions on social issues.

“I literally can’t vote Republican anymore,” Veling said, citing gun control in the wake of the Uvalde massacre, LGBTQ rights and abortion access as key issues. “They’ve given me no choice.”

Texas’ political makeup is slowly changing from solidly Republican to a more-competitive landscape, with an important caveat: The shift is only taking hold in big cities. Democrats now routinely win in the urban counties around Austin, Dallas, San Antonio and Houston while the GOP still dominates rural areas. But O’Rourke is betting he can bring Tarrant, with its mix of city life and bucolic suburbia, to his column on election day Nov. 8.

The 50-year-old former congressman from El Paso won Tarrant during his 2018 senate bid against Ted Cruz, squeaking by with a 4,000-vote margin. And in 2020, Joe Biden eked out a win in the presidential race, topping Donald Trump by 1,826 votes. He was the first Democrat to carry the county since 1964.

Support for the GOP can be seen lower down on the ballot, where residents have voted in Republicans for Fort Worth mayor, for Tarrant County judge and for eight of the 11 state representatives from the area.

“Tarrant County is still very much up for grabs,” said Joanne Green, a political science professor at Texas Christian University in Fort Worth. “It’s still going to be a battleground.”

Statewide, polls show O’Rourke trailing incumbent Greg Abbott by five to nine percentage points. But the race is tighter in Tarrant, where likely voters favored Abbott by three points in an August survey by the Hobby School of Public Affairs at the University of Houston and Texas Southern University.

O’Rourke’s campaign says that his support for gun control, abortion rights and public education will lure moderates in Tarrant County. His strategy is not just to rally the base, but to fight for every vote he could possibly get. That means he’s making appearances all over the country’s second-biggest state on a wager that his bread-and-butter issues can win converts.

“Republicans, we’re glad that you’re here. Democrats, you’re welcome as well. Independents, you’re in the right place,” O’Rourke told a cheering crowd at a recent rally in Fort Worth. He promised to fight for women’s right to abortion and protect transgender children, but also waded into less partisan issues with pledges to recruit more school teachers and lower property taxes.

Still, it seems unlikely any of that outreach will do him much good with the most strident conservatives, and Tarrant County has plenty of those. In recent months, they’ve rallied around issues related to education, railing against what they say are efforts to indoctrinate children with “woke” values and poison their minds with school library books that feature queer characters or deal frankly with racism.

In August, a graphic-novel version of “The Diary of a Young Girl” by Anne Frank was briefly banned in some school libraries, and last year a Black principal was forced out of a high school following accusations he was promoting critical race theory. School boards in at least four of the 20 school districts in the county have been taken over by conservatives advocating for major changes in teaching.

Last month, the board at Grapevine-Colleyville district voted to put limits on classroom discussions of race and gender and gave the trustees more control over library books.

“Thank you for allowing me as a parent to prevent my fourth-grader from being sexualized in his school,” a mother said at a raucous board meeting attended by more than 200 people.

It’s unclear how much of that sentiment represents broadly held convictions, or whether ultra-conservatives were just lucky to catch their opponents off guard when it came to school-board positions far down the ballot. It’s also uncertain if Tarrant County elections have seen the full impact of the many new arrivals.

The county’s population grew 17% in the decade through 2020, adding more than 300,000 people, and the boom seems likely to have continued as the state becomes a magnet for corporate relocations and expansions, including for financial services firms near Dallas.

Most of Tarrant’s new residents came from within Texas, but there were also large out-of-state contingents from Southern California, Chicago and New York. The county has become more diverse, with Asian, Hispanic and Black people becoming a greater share of the population over the past decade.

So while in 2000, Tarrant was more Republican than Texas as whole, that’s shifted. Its voters are now 5.8 percentage points more Democratic than the average for Texas.

While it would be logical to assume that the influx of newcomers and the increase in racial diversity in the area has contributed to its purple hue, Tarrant County GOP Chair Rick Barnes says that many out-of-staters come to the county to flee liberal policies.

They want “to get away from the very things that Robert Francis O’Rourke stands for,” Barnes said, using the candidate’s full name.

Others see Republicans losing more ground if the culture wars go so far that they repulse moderates.

That’s the expectation of Piper Ogan, a Fort Worth resident who leads the local chapter of the Mothers Against Greg Abbott political action committee. Ogan’s children attend Keller ISD -- the district that briefly banned the graphic adaptation of Anne Frank’s memoir along with the Bible, among other books.

“I know people who voted for Trump and I think the trigger was what’s happening with our schools and now they won’t vote that way again,” Ogan said.