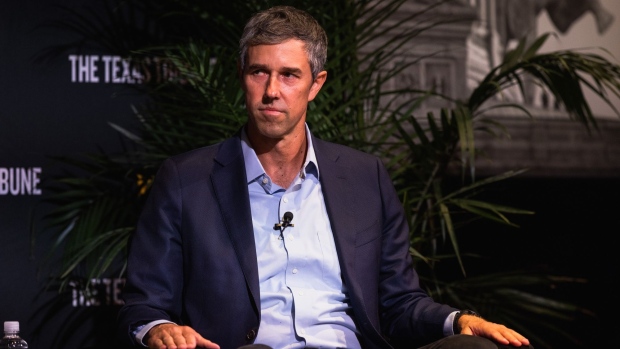 Beto O'Rourke, Democratic gubernatorial candidate for Texas, during The Texas Tribune Festival in Austin, Texas, US, on Saturday, Sept. 24, 2022. In its thirteenth year, the Festival features more than 300 speakers from the worlds of politics, public policy, technology and media. , Bloomberg

(Bloomberg) -- The Texas gubernatorial candidates traded barbs about who is best positioned to tame immigration chaos at the border during the candidates’ only debate ahead of the Nov. 8 election.

The incumbent, Republican Governor Greg Abbott, lambasted Democrat Beto O’Rourke for minimizing what he called a “disaster” for local communities. O’Rourke countered that the governor’s Operation Lone Star border-security effort was a flop, with little to show for all the money spent.

“Four billion dollars and it’s been a complete failure, much as everything that the governor has done has been a failure for this state,” said O’Rourke, a 50-year-old former US congressman from El Paso.

“What we need are solutions, not more stunts,” he said, adding that he supported a temporary guest worker program to fulfill US labor shortages.

For his part, Abbott sought to link O’Rourke with President Joe Biden’s immigration policies, saying they were the root cause of the surge in crossings. He defended the practice of busing migrants from Texas to cities such as New York, Chicago and Washington, and said he will add more trips to other so-called sanctuary cities for migrants.

“Farms and ranches are run over, communities that are disrupted, homes that are invaded,” Abbott, 64, said. “We have more people coming across the border than ever in the history of our country.”

O’Rourke was seeking to make an impression with undecided voters and motivate his base as he stares down polls that show him trailing the incumbent by 5 to 9 percentage points with just a bit more than a month before the vote. His effort might have been hindered by the scheduling of the debate -- Friday nights in the fall are dominated by high-school football games in many Texas communities.

There was less pressure on Abbott to score a big win, according to analysts, given his sizable lead in a state that hasn’t elected a Democrat since 1994. Polls show Texans broadly in favor of his attempts to deter immigration.

“O’Rourke used the debate to try to persuade moderates and independents to vote for him, or at least not vote for the governor,” said Brandon Rottinghaus, a political science professor at the University of Houston. “On border issues, gun control, and abortion rights, O’Rourke personalized the issue to appeal to middle-of-the-road voters.”

O’Rourke is running a much closer contest than has been seen in years in Texas, a reflection of a backlash against Abbott over the state’s severely restrictive abortion laws and reluctance to pursue gun-control legislation. O’Rourke criticized Abbott for his inaction following the school massacre in Uvalde where a teenage gunman shot and killed 19 students and two teachers.

“It’s been 18 weeks since their kids have been killed, and not a thing has changed in this state to make it any less likely that any other child will meet this fate,” O’Rourke said, hours after meeting with Uvalde families who urged more gun control. He said he wouldn’t pursue a mandatory buyback of assault-style rifles, as he’d proposed during his short-lived bid for president in 2019.

“As governor of the state of Texas I need to be focused on what we can get done,” he said, citing raising the minimum age to purchase those types of weapons to 21, instituting red-flag laws to take guns away from unstable individuals and requiring universal background checks for gun buyers.

“We need to get to the bottom of what is really ailing our communities, and that is the mental health,” he said. “No parent should lose a child, and we want to do everything we can to make sure that does not happen.”

The debate was held without a live audience per the terms agreed to by the candidates. O’Rourke has pushed to hold more debates before the vote, but none are scheduled.