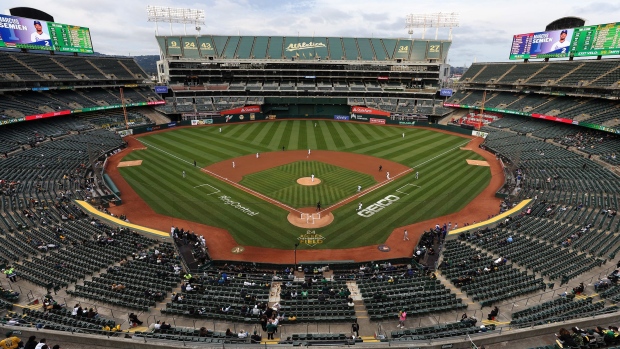 (Bloomberg) -- The Oakland Athletics are one step closer to building a $12 billion ballpark and real estate development at the Port of Oakland after a state agency decided that a 55-acre terminal is no longer needed for maritime operations.

The baseball team is seeking to move to Howard Terminal, which has been without a tenant since SSA Marine Inc. relocated to newer facilities in 2014, and has threatened to move to Las Vegas if the project isn’t approved. The plan has generated opposition from the shipping industry, which argued it will cause major impacts to both the surrounding community and port operations.

The San Francisco Bay Conservation and Development Commission voted 23-2 Thursday to allow Howard Terminal to be used for purposes other than port activities, a major step that allows the city and the team to have more detailed discussions on the project. The A’s still need approval from stakeholders including the port, the city and various state agencies, the port said in a statement.

A’s President Dave Kaval said on Twitter that the vote is a “huge win” for the project. Oakland Mayor Libby Schaaf, a supporter of the plan, said she will work closely with the community “to bring this bold vision into a beautiful reality.”

Although Howard Terminal is no longer used to unload ships, the terminal now serves as a truck parking lot, as well as a pop-up container yard and a training site for dockworkers. For the industry, allowing it to be used for anything other than maritime operations would deal another blow to already-stretched supply chains.

Oakland is the third-busiest port in California, but container-cargo volume has hardly budged, rising less than 0.5% since 2005. After ranking as the fourth-busiest hub in the US just a few years ago, today the port’s traffic barely cracks the top 10.

The A’s, who currently play at the 1960s-era Oakland Coliseum, want to build a 35,000-seat baseball stadium, 3,000 housing units, 1.7 million square feet of office and retail space and a 400-room hotel, among other amenities, at the waterfront.