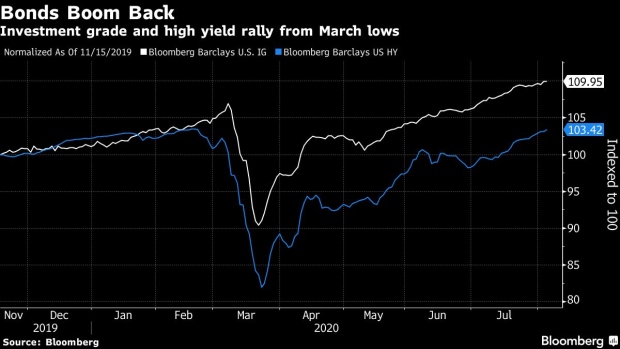 Howard Marks, co-chairman and co-founder of Oaktree Capital Group LLC, speaks during the Bloomberg Year Ahead Summit in New York, U.S., on Thursday, Nov. 7, 2019. The summit addresses the most important trends, issues and challenges every executive will need to consider in 2020 and beyond. Photographer: Mark Kauzlarich/Bloomberg , Bloomberg

(Bloomberg) -- Oaktree Capital Group Co-Founder Howard Marks says the Federal Reserve’s intervention at the peak of the pandemic was necessary to keep companies afloat and avoid a potential economic shutdown, even if that’s giving his firm fewer distressed-debt targets.

“If they had not done the things they did, we would be talking about a much more serious economic event, we may even be using the word depression,” or perhaps global recession, Marks said during an interview with Bloomberg TV Thursday.

Global credit and equity markets have staged a dramatic rebound since March, when the Fed first took unprecedented steps to steady the economy. But the central bank has fueled such a rally that distressed debt, which approached $1 trillion outstanding at the height of the pandemic, has since fallen dramatically, presenting fewer options for firms like Oaktree to put billions of dollars to work.

Distressed-debt specialists have raised record amounts of cash through the coronavirus outbreak as companies falter and bankruptcies mount. But for many corporations, additional liquidity spurred by the Fed has pushed borrowing costs to near record lows, taking the lowest-rated junk bonds out of distressed territory this week for the first time since late February.

Los Angeles-based Oaktree is one of the largest distressed-debt investors in the world, with more than $19 billion committed to credit from troubled companies. The fund has thrived most in times of economic stress, when prices on bonds of companies in danger of defaulting fall to deep discounts.

As successful as the Fed has been in propping up corporate debt prices, the support is only temporary, and its inevitable withdrawal could put more companies at risk, Marks told Bloomberg TV’s Erik Schatzker. Having so much liquidity in the economy will likely lead to inflation, he said, “but that does not mean that it was a mistake.”

While the Fed and U.S. government have helped keep many businesses afloat, not all are appropriate candidates for relief, Marks said. Supporting companies that were otherwise doomed to fail, dubbed zombies, is taking away resources from others who are better positioned to recover, he said. The central bank can provide liquidity, but not solvency, he added.

“Companies that are unsuccessful should perish,” Marks said. “Let the chips fall.”