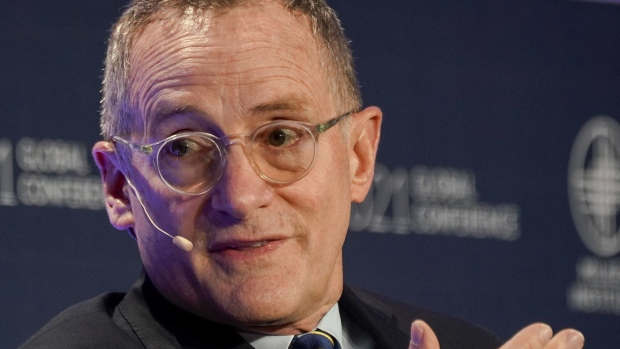 (Bloomberg) -- Oaktree Capital Group LLC co-founder Howard Marks is gearing up for one of the best buying opportunities since the global financial crisis as higher interest rates and a looming recession push more companies into distress.

After settling for “moderate” returns partly due to cheap credit in the past few years, the Los Angeles-based firm with about $163 billion in assets is looking to finance those companies struggling to repay debt.

“Now our time is coming back,” he told investors in Singapore this week and in a subsequent interview with Bloomberg News.

Marks predicts US inflation has likely peaked, and expects rates to stay near the 5% mark in the next 5 to 10 years. An accompanying shift in consumer appetite alongside higher borrowing costs will lead to “significant distress” at many companies, he said.

“A year ago the outlook was considered flawless and I think we’re going to reach a point where they consider it hopeless,” he said of investors. “And that’s when you get the big buys. That’s when you get to be a buyer of assets cheap and a maker of loans at high yields with safety.”

Credit markets have seized up as the Federal Reserve hikes rates at the fastest pace since the early 1980s. Banks that agreed to backstop loans at one price months ago are finding that appetite has changed and funds are demanding higher yields. That’s prompting firms specializing in distressed debt to prepare for a potential boom.

Marks said losses for banks on hung bridge loan deals has damaged credit markets. One example was the acquisition of Twitter Inc. Elon Musk saddled the firm with almost $13 billion of debt that’s now in the hands of Wall Street banks struggling to offload it to investors.

After poorly-timed debt sales, the banks have resorted to selling the loans at discounts of as low as 70 cents on the dollar, Bloomberg previously reported.

“Just imagine the magnitude of those losses,” Marks said.

And while corporate America as a whole is not highly levered, the distress is piling up, he said.

“This is going to be a buyer’s market and a lender’s market. We’re going to have much better opportunities,” he said, adding that tech buyouts over the last 13 years have led to an accumulation of debt. “We’ll be looking among the ruins for great bargains.”

--With assistance from Paula Seligson.