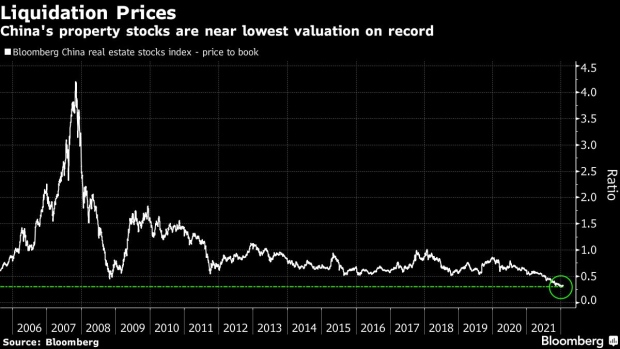 (Bloomberg) -- U.S. investment firm Oaktree Capital is moving to seize a plot of land used as collateral by China Evergrande Group, according to the Financial Times. The Chinese developer has told creditors it aims to issue a preliminary restructuring plan in the next six months.

Evergrande said in a statement Wednesday after holding a telephone conference with stakeholders it “will continue to listen carefully to the opinions and suggestions of the creditors.” The firm plans to treat all categories of bondholders equally, such as onshore and offshore investors, with help from its financial advisers, a company executive said on the call, according to people familiar with the matter.

Evergrande shares slumped 5%, Times China tumbled more than 20% following the sale, while Logan dropped as much as 14%.

Logan sold HK$1.95 billion of equity-linked securities and said it will use the net proceeds for refinancing its existing debt. The securities, payable semi-annually, will mature on Aug. 4, 2026, unless there is earlier redemption.

Times China is selling 117.7 million new shares at HK$3.40 apiece, according to a Hong Kong stock exchange statement. The price represents a discount of 17.1% to the stock’s closing price on Wednesday.

Oaktree Capital has moved to seize a plot in Hong Kong after Evergrande defaulted on a loan against which Oaktree had security, according to the Financial Times report, which cited people familiar with the matter. Evergrande had planned to use the asset as collateral when restructuring its offshore debt, the report said.

China Aoyuan agreed to sell properties in Canada to Anthem Properties Group for C$215 million ($169 million), according to a filing. Aoyuan also said Deloitte has resigned as an auditor for the company, effective Jan. 25, due to a dispute over audit fees.

Evergrande reiterated its position that it will “evaluate the conditions of the Group with a view of formulating a restructuring plan for the protection of the rights of the stakeholders,” according to a filing following a call with creditors.

The property company is procuring an auditor to carry out relevant work “and will continue to listen carefully to the opinions and suggestions of the creditors,” it said.