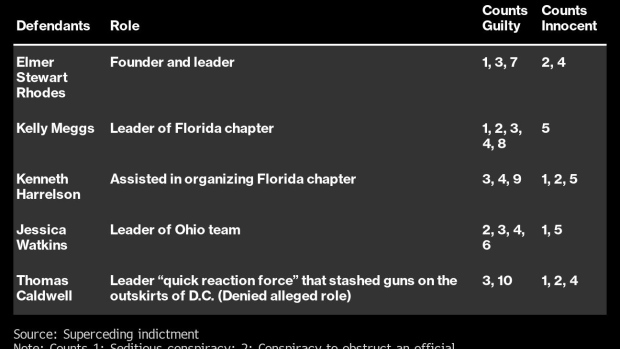 (Bloomberg) -- Stewart Rhodes, leader of the right-wing Oath Keepers group, and one other defendant were convicted of seditious conspiracy for their roles in the storming of the US Capitol on Jan. 6, 2021, capping a trial of the most serious crimes alleged among the hundreds of people prosecuted.

The guilty verdicts by a Washington jury Tuesday mark a major win for the Justice Department in its effort to hold individuals accountable for breaking into the Capitol while Congress met to ratify the 2020 presidential election. The riot by thousands of former President Donald Trump supporters involved assaults on 140 police officers and caused more than $2 million in damage on the building.

After three days of deliberations, a federal court jury found Rhodes, 57, of Texas, guilty of three charges including obstruction of an official proceeding and tampering with documents. A second defendant in the case, Kelly Meggs, was found guilty of the sedition charge that he and Rhodes conspired to stop the transfer of presidential power with a use of force intended to oppose the authority of the US government.

The convictions “reinforce the fact that violence of January 6th included a deliberate attempt to overturn the results of the 2020 election and block the transfer of presidential power,” Jan. 6 committee Chairman Bennie Thompson and Vice Chair Liz Cheney said in a joint statement. “It’s vital that there be accountability for every vile aspect of January 6th and the events that led to that day’s tragedy.”

To win a conviction on the sedition count, prosecutors had to convince the jury beyond a reasonable doubt that two or more people intentionally conspired to use force to oppose the authority of the federal government or to prevent, hinder or delay the execution of any US law.

In a marathon trial that stretched over seven weeks, the government displayed hundreds of messages, video footage and call logs to convince a jury that the defendants -- Rhodes, Meggs, Kenneth Harrelson, Jessica Watkins and Thomas Caldwell -- coordinated to stop Joe Biden from becoming president.

“On Jan. 6 our democracy was under attack,” Assistant US Attorney Kathryn Rakoczy said during closing arguments. “For these defendants, it was ‘everything we trained for.’”

Prosecutors questioned multiple witnesses, including FBI agents, a civilian who recorded a meeting with Rhodes after the Capitol siege and two Oath Keepers who pleaded guilty to conspiracy. Some of the defendants traveled together, stored firearms in a hotel on the outskirts of Washington and breached the Capitol building in an orderly line, the evidence showed.

During the trial, Oath Keepers testified that they had no ill-intent, saying that they traveled to Washington to provide security to prominent individuals at pro-Trump events. They also claimed that the so-called quick-reaction force that housed firearms was only meant for an emergency situation, such as an attack by left-wing activists or if Trump invoked an act they believed would give them authority to act as a militia.

Defense attorneys argued that prosecutors cherry-picked bombastic statements that amounted to no more than bluster and argued no witness could claim anyone in the group had a plan or gave instructions to attack the Capitol or disrupt the electoral count. Rhodes, Caldwell and Watkins took the stand in their own defense.

“Not one piece of evidence [the FBI] reviewed showed an actual plan,” James Bright, an attorney for Rhodes, said during closing arguments. “Not one person has testified there was a plan,” he said.

Prosecutors put Rhodes at the center of the alleged plot, which began with his warnings of a civil war after Biden won what he viewed as a fraudulent election and calls for the group to act with force if Trump failed to take steps to retain power. Rhodes repeatedly called for Trump to invoke the Insurrection Act, which gives the president authority in certain situations to mobilize armed forces.

Some former Oath Keepers testified that Rhodes’ increasingly violent rhetoric made them uncomfortable. A secretly-recorded Oath Keeper meeting from November 2020 revealed Rhodes stating that the group’s mission would be to travel to Washington to stand up against a stolen election.

Prosecutors depicted Rhodes on Jan. 6 “as a general overlooking a battlefield,” calling on members to meet at a spot on the Capitol grounds during the riot. The government displayed a 90-second call between Rhodes and Meggs shortly before the Florida leader trespassed the building with Watkins, Harrelson and others in the group, implying that the Oath Keeper founder had given an instruction to enter the Capitol.

On the stand, Rhodes tried to distance himself from the other defendants, claiming that he was uninvolved in storing weapons in Virginia and calling some of the members “stupid” for entering the Capitol. He claimed that he was unable to hear Meggs on the phone because of the noise from the crowd. The government showed evidence that Rhodes merged that call with Michael Greene, another Oath Keeper facing charges, who testified he didn’t remember a three-way conversation.

Watkins and two Oath Keepers who pleaded guilty to conspiracy testified they were given no orders to enter the building, but spontaneously followed the crowd.

“It was really stupid. I got swept up in it,” Watkins said.

But the other two Oath Keepers testified that the group’s chats implied that members would take action to stop the transfer of power. “It seemed to me that a lot of us were prepared, I was prepared, to stop the certification process one way or the other,” Jason Dolan testified.

Prosecutors also sought to prove that the alleged conspiracy didn’t end on Jan. 6. They showed evidence of Rhodes spending time in Texas with Joshua James, the Alabama Oath Keeper leader who pleaded guilty to seditious conspiracy. While there, James helped stockpile weapons for a possible civil war, according to the government.

Prosecutors alleged that Caldwell, a 68-year-old Navy veteran, headed up the quick reaction force at the Virginia hotel. In one message, Caldwell wrote that the hotel could be used to “stage materials if things go high order.” In a separate one, he mentioned finding a boat to ship “heavy weapons” across the Potomac River.

David Fischer, Caldwell’s attorney, has compared his client to Walter Mitty, a fictional character who had an active fantasy life. Caldwell, who denied his alleged role in the quick reaction force, attributed the “heavy weapons” reference to his creative writing hobby.

He also testified that there was nothing nefarious about his presence at the Virginia hotel and simply booked it so that he and his wife could easily get to the Ellipse to hear Trump speak.

--With assistance from Zoe Tillman.

(Updates with statement from Jan. 6 committee in sixth paragraph)