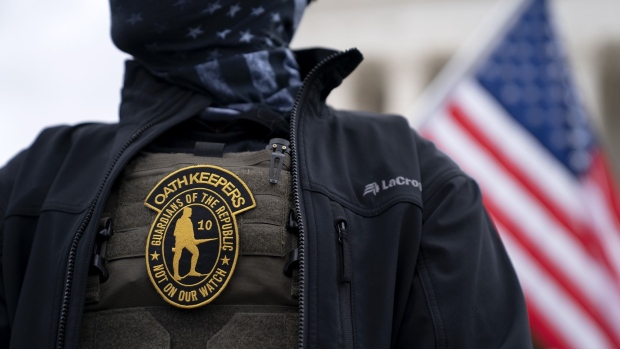 A demonstrator wears an Oath Keepers anti-government organization badge on a protective vest during a protest outside the Supreme Court in Washington, D.C., U.S., on Tuesday, Jan. 5, 2021. Republican lawmakers in Washington are fracturing over President Trump's futile effort to persuade Congress to overturn his re-election defeat, as his allies spar with conservatives who say the Constitution doesn't give them the power to override voters. Photographer: Stefani Reynolds/Bloomberg , Bloomberg

(Bloomberg) -- The Oath Keepers threatened a “bloody civil war” against a “puppet regime” if Joe Biden took the White House from Donald Trump, according to chat messages shown to jurors in the first Jan. 6 seditious conspiracy trial.

“We are going to have a fight,” Stewart Rhodes, the militia group’s founder, said in a December 2020 message. “That can’t be avoided, but it’s better to have a fight now, while Trump is commander-in-chief then to wait till he is gone.”

The messages were presented by federal prosecutors Friday as evidence against Rhodes and four other defendants who are accused of sedition, or attacking the US government. According to prosecutors, the messages show that the Oath Keepers came to the Capitol ready for violence.

Rhodes and his co-defendants have denied any conspiracy, contending that they traveled to Washington to provide security for authorized events and in preparation for Trump to invoke the Insurrection Act, which they claim would authorize the Oath Keepers to act as a military force. Rhodes’ lawyer has also argued that the government cherry-picked inflammatory statements that misrepresent what happened.

Federal Bureau of Investigation Special Agent Byron Cody testified that Rhodes made the statements in the weeks leading up to the Capitol riot. According to the government, Rhodes was suggesting that Trump could use the Insurrection Act even before Jan. 6 to spur a militia movement that would prevent Biden from taking office. Rhodes said the group would take matters into its own hands if Trump failed to act.

“Trump has one last chance to act,” Rhodes wrote on the evening of Dec. 14, after state electors cast their votes declaring Biden as president. “He must use the Insurrection Act.” The message was styled as the first of two open letters to Trump.

Five days later, Rhodes wrote that it would be “a tragic mistake” for Trump not to call for military action before Jan. 6. “Congress will stab him in the back,” Rhodes said.

On Dec. 23, Rhodes posted an image of George Washington crossing the Delaware River. He urged Trump to follow Washington’s example and attack. Rhodes warned that, if Trump failed to intervene, then it would leave his group no choice but to declare independence from a “puppet regime and fight for our liberty.”

A week later, Rhodes logged into a chat called DC Op Jan 6 2021 and gave operations assignments for the group’s upcoming trip to Washington. He noted that he had been busy “on back channel working groups trying to advise the president.”

Rhodes said the Congressional certification of Biden’s election win would be the “final nail in the coffin on this Republic” and warned again that they would act with or without Trump, according to a message displayed by the government.

Cody responded that he had no idea about the size of Washington’s army.