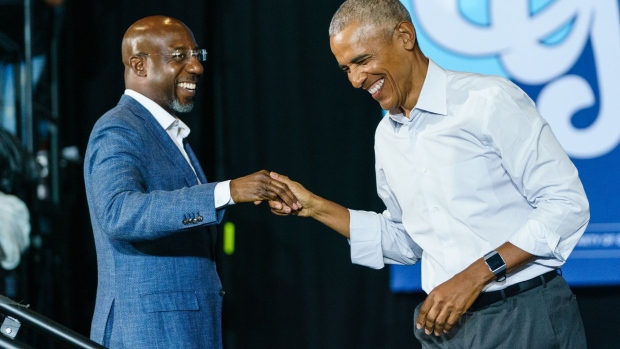 Obama, the first Black US president, appeared before more than 2,000 people packed into the city’s Pullman Yards complex and urged voters not to grow complacent during yet another runoff vote.

“You have to run to the tape,” Obama said. “I know you can do it because you’ve done it before.” Warnock, an incumbent, and the state’s other Democratic senator, Jon Ossoff, won their seats in a 2021 runoff.

Obama said President Joe Biden had been successful, in large part because of Democratic control of the US Senate, which would not have been possible without those runoff victories. “That happened because of you Georgia,” he  said. “And now we need you to do it again.”

Warnock took verbal jabs at Walker, a University of Georgia football star and Heisman Trophy winner who lived in Texas for many years. “He was an amazing running back,” the senator said. “And we’re going to send him running back to Texas.”

In the Nov. 8 election, neither Warnock nor Walker received the 50% required to avoid a runoff, thanks to a third-party candidate. That put them in a pitched battle for a seat that will either bolster the narrow Democratic majority in the Senate, or keep it at the 50-50 tie it’s been since Biden took office.

While it’s commonplace for a party luminary like Obama to campaign for a candidate in a tight contest, the former president’s involvement in the Georgia US Senate race has an added layer of significance in a state considered the cradle of the civil rights movement.

Warnock is Georgia’s first African-American senator. If Walker, who’s backed ex-president Donald Trump, wins, he will join South Carolina’s Tim Scott as the only Black Republican in the Senate.

Turnout is critical in runoff elections and Obama offers Warnock a powerful messenger. The former president remains wildly popular among Democrats, especially Black voters, who through a reverse migration from Democratic northern cities to Atlanta and across the South helped morph Georgia from a Republican bastion into a battleground state.

But Walker has sought to counter Warnock’s efforts in Democrat-friendly Atlanta and on Thursday canvassed Republican enclaves along Georgia’s western border with Alabama. He had alarmed some Republicans by not campaigning in the days after Thanksgiving.

On Thursday, a crowd of about 100 people, most of them White, waited for him in a sunny parking lot at the Piggly Wiggly grocery store in Columbus. Many had Trump hats. Many also sported the peach stickers declaring they had already voted in the race.

The crowd screamed as his campaign bus rolled in.

Walker riffed through a grab bag of culture war talking points: transgender athletes in women’s sports, energy independence, the border and crime. He bragged about his better-than-expected debate performance against Warnock, a preacher at the famed Ebeneezer Baptist Church, where the Reverend Dr. Martin Luther King Jr. once preached.

“I’m an Auburn man, but a Herschel supporter,” said Richard Allen, a retiree who said he and his friends had begun saying ‘Go Herschel’ every time it was their turn to shoot at pool.

Beating Democrats in general was Georgia state Senator Randy Robertson’s concern, in a speech from an improvised stage before Walker’s bus rolled in.

“Georgia was red before Warnock got here and it’s going to be red when he’s gone,” Robertson said, while urging the crowd to ignore polls, the media and reporters.

Warnock and allied groups are spending $55.8 million in advertising in the runoff compared to $25.9 million by Walker and the GOP super political action committees supporting him according to AdImpact. The totals, current through Thursday, include spending on ads that have already run and those booked in the weeks ahead.

Warnock’s campaign is the biggest spender at $26.2 million, followed by Georgia Honor, a super-PAC funded by the Democratic leadership-aligned Senate Majority PAC, at $22.1 million. The Senate Leadership Fund, which has ties to Senator Mitch McConnell, is spending $12.7 million on the runoff, followed by Walker’s campaign at $10.3 million.

An ad featuring Obama started running in the Atlanta market on Nov. 30, according to AdImpact. His wife, former first lady Michelle Obama, recorded robocall messages for Warnock as well.

Obama has focused on character, and in his previous visit to Atlanta he excoriated Walker’s candidacy.

The Walker campaign has been mired in scandal, including allegations of domestic abuse and payments for former girlfriends’ abortions, despite his anti-abortion policy stance.

Walker has denied the accusations.

--With assistance from Bill Allison and Christian Hall.

(Updates with Obama at rally, from second paragraph.)