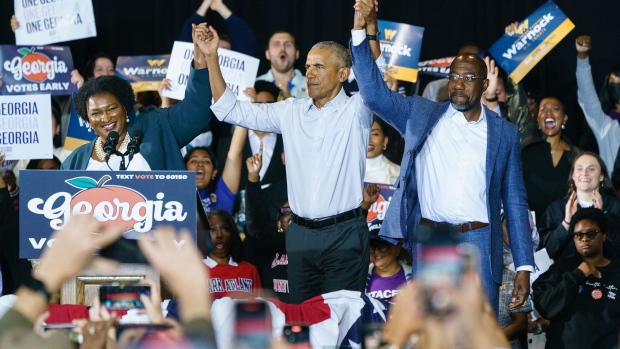 (Bloomberg) -- Barack Obama’s return trip to Georgia gives Democrat Raphael Warnock a unique advantage: The first Black US president wading into a rare statewide contest in which both contenders are Black men.

Warnock, the incumbent, and his Republican opponent, Herschel Walker, are competing in a Dec. 6 runoff election for a Georgia Senate seat.

Shortly before the Nov. 8 election, the former president delivered a fiery stump speech for Warnock as polls showed a dead heat. But neither candidate got the 50% required to avoid a runoff, thanks to a third-party candidate, leaving them in a pitched battle for a seat that will either bolster the narrow Democratic majority in the Senate, or keep it at the 50-50 tie it’s been since President Joe Biden took office.

While it’s commonplace for a party luminary like Obama to campaign for a candidate in a tight contest, the former president’s involvement in the Georgia US Senate race has an added layer of significance in a state considered the cradle of the civil rights movement.

Warnock is Georgia’s first African-American senator. If Walker, a former University of Georgia football star, wins, he will join South Carolina’s Tim Scott as the only Black Republican in the Senate.

Turnout is critical in runoff elections and Obama offers Warnock a powerful messenger. The former president, who will appear with him at a rally in Atlanta on Thursday, remains wildly popular among Democrats, especially Black voters, who through a reverse migration from Democratic northern cities to Atlanta and across the South helped morph Georgia from a Republican bastion into a battleground state.

“Herschel Walker was a heck of a football player. In college he was amazing. One of the best running backs of all time,” Obama said in his Oct. 28 rally for Warnock. “But here’s the question: does that make him the best person to represent you in the US Senate? Does that make him equipped to weigh in on the critical decisions about our economy and our foreign policy and our future?”

Warnock’s since adopted that message for his campaign.

“He not only motivates Black and Brown and Latino and Asian voters,” Tharon Johnson, a Georgia-based Democratic strategist, said of Obama. “He also can motivate some of these moderates and independents that Senator Warnock will need to win. Obama is in a unique position to articulate the difference, the contrast between these men.”

A survey from FrederickPolls, Compete Digital and AMM Political released Wednesday showed Warnock and Walker in a statistical tie.

More than 833,000 people have voted as of shortly after midnight on Wednesday, a new turnout record, according to the Georgia Secretary of State’s office.

“Republicans are closing the gap every day and there’s still about two times as many high-propensity Republican voters as high-propensity Democrat voters left,” said Chris Hartline, a spokesman for the National Republican Senatorial Committee.

In a statement, Walker asked why Warnock was “campaigning with Obama” instead of Biden. “He should be brave enough to stand by his boss, who he’s voted with 96% of the time.”

Warnock and allied groups are spending $53.7 million in advertising in the runoff compared to $25.3 million by Walker and the GOP super-PACs supporting him, according to AdImpact. The totals, current through Thursday, include spending on ads that have already run and those booked in the time remaining.

Warnock’s campaign is the biggest spender at $24.9 million, followed by Georgia Honor, a super-PAC funded by the Democratic leadership-aligned Senate Majority PAC, at $21.6 million. On the GOP side, the Senate Leadership Fund, which has ties to Republican Senate Leader Mitch McConnell, is spending $12.4 million on the runoff, followed by Walker’s campaign at $10.2 million.

Kemp kept his distance from Walker during the general election. Walker is backed by former President Donald Trump, whose entreaties to overturn Biden’s 2020 victory in Georgia Kemp famously rejected. The Walker campaign was also mired in scandal, including allegations of domestic abuse and payments for former girlfriends’ abortions, despite his anti-abortion policy stance.

Walker has denied the accusations.

Kemp received more 200,000 votes more than Walker in the Nov. 8 election. Warnock has cut ads trying to court those Kemp voters, including one in which Lynn Whittenburg, a White woman from Rossville, Georgia, says that she’s a Republican who voted for the governor’s reelection but that she can’t support Walker. Warnock’s large cash advantage allows him to be able to make those kinds of very strategic ads, Johnson said.

Julianne Thompson, an Atlanta-based Republican strategist, said that while Obama’s rally will energize Warnock’s base, she’s not sure it will translate into votes. She said that Kemp is also a major asset for Walker, since the governor is popular in Georgia’s rural areas.

“This election is not going to be decided by swing voters,” Thompson said. “It’s going to be a matter of which party turns out their base.”