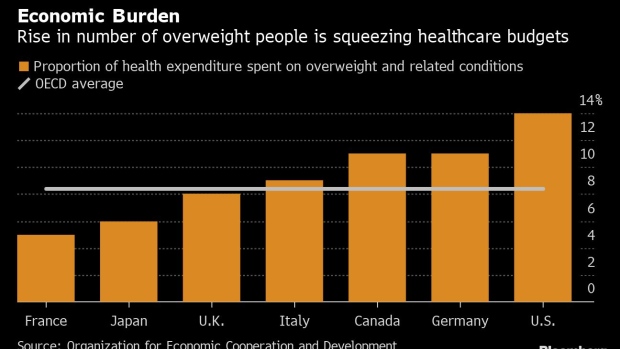 The world is officially obese, and that’s bad for health, education and economic growth, according to the OECD.

More than half of people in 34 of its 36 member countries is overweight, and almost half of those are obese, the Paris-based group said in study published Thursday. Adding to health concerns, it said childhood and morbid obesity have gone from a “rare event to a common occurrence.”

In addition to personal wellbeing and reduced life expectancy, the growing problem is holding back economic growth and putting additional pressure on government budgets, according to the OECD. In total, member countries are spending about $311 billion per year on treating overweight and related conditions.

The analysis concludes those adults who are overweight are less productive and more likely to be absent from work, while children do less well at school.

It estimates that the high percentage of overweight people reduces GDP by an average of 3.3% across the OECD member states. There’s an additional economic burden from increased health spending, with OECD countries spending about 8.4% of their total health budget on treating obesity-related diseases. The figure is highest in the U.S., at 14%.

The OECD proposals highlight the growing need for action. They include better food labeling, better regulation of ads for unhealthy food to children, and more promotion of physical exercise.

“There is no more excuse for inaction,” said OECD Secretary-General Angel Gurria. “By investing in prevention, policymakers can halt the rise in obesity for future generations, and benefit economies.”

To contact the editors responsible for this story: Craig Stirling at cstirling1@bloomberg.net, Zoe Schneeweiss, Brian Swint