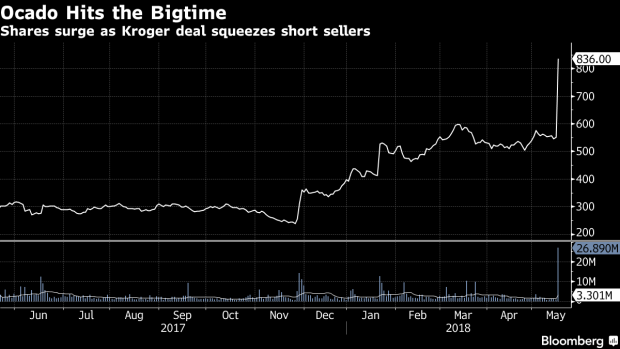 Nick Roditi, a former money manager under George Soros who first invested in the U.K. online grocer in 2005, saw the 15.4 percent position he controls through an investment vehicle gain 350 million pounds ($473 million) Thursday. Ocado shares soared as much as 81 percent to a record after it struck a deal to license its technology to U.S. supermarket owner Kroger Co.

Jorn Rausing, Ocado’s second-largest shareholder, has made almost 250 million pounds ($337 million). The Swedish billionaire, a beneficiary of a family trust that owns Tetra Laval, has been a shareholder and board member since committing 15 million pounds in 2002 through his investment vehicle.

Ocado Chief Executive Officer Tim Steiner raked in about 34 million pounds from his 1.6 percent stake. Steiner is also a beneficiary of the Millennium Trust, which owns a separate 2.4 percent stake in Ocado, according to Bloomberg data.

To contact the reporter on this story: Sam Chambers in London at schambers7@bloomberg.net

To contact the editors responsible for this story: Eric Pfanner at epfanner1@bloomberg.net, Marthe Fourcade