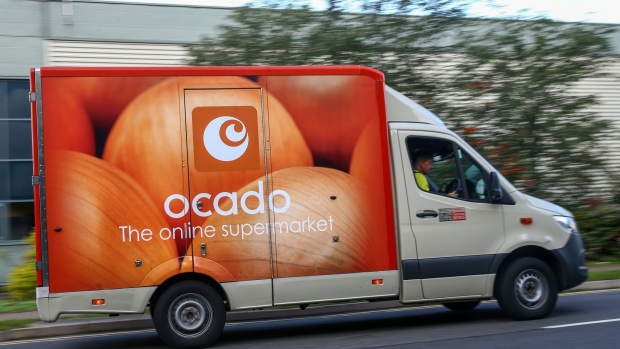 A grocery delivery truck operated by an Ocado Group Plc departs from a fulfillment centre in Enfield, U.K., on Wednesday, Sept. 30, 2020. Covid-19 lockdown enabled online and app-based grocery delivery service providers to make inroads with customers they had previously struggled to recruit, according the Consumer Radar report by BloombergNEF. , Bloomberg

The British e-commerce group will raise the funds via an accelerated share placing, which includes a tranche for retail investors, the company said in a statement Monday. Ocado also agreed a new £300 million credit facility with a group of banks and reiterated its outlook for this year.

The company had gathered enough orders to cover the share sale within about half an hour, according to terms seen by Bloomberg.

Ocado, whose shares have nearly halved this year, said the funds will give it enough liquidity to meet existing commitments to current clients and drive further growth.

While Ocado is best known in Britain as an online grocer, its main focus is selling robotic warehouse technology, maintaining partnerships with retailers worldwide from Kroger Co. in the US to Coles Group Ltd. in Australia. The company said the surge in virtual food shopping during the pandemic will continue and the additional funds will help it ramp up capacity. It also wants to reduce the amount of time it takes to get its highly automated warehouses up and running.

Ocado was founded by three former Goldman Sachs Group Inc. bankers in 2000 and has hardly ever made a profit since. It has raised significant amounts of cash over the past two decades to fuel the development of its robotic “grid system.”

During the pandemic, Ocado Retail, its joint venture with Marks & Spencer Group Plc, struggled with capacity, having to temporarily close its website in March 2020 because it was deluged with orders.