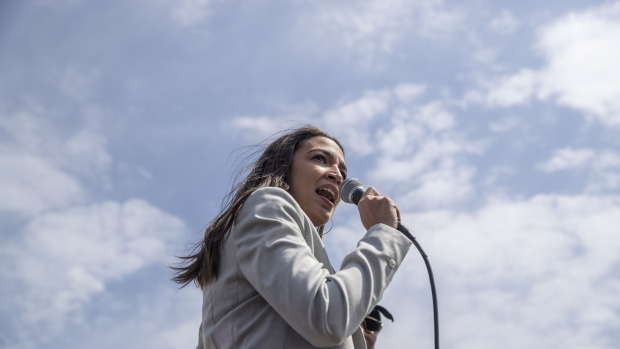 (Bloomberg) -- A fight among New York Democrats over a redrawn district map is escalating as Representative Alexandria Ocasio-Cortez called for the head of the party’s House campaign to step down if he ends up in a primary challenge with another incumbent.

“I think it’s ridiculous,” Ocasio-Cortez said Thursday of Representative Sean Patrick Maloney’s announcement that he would run for re-election in a district that may pit him against progressive Democrat Mondaire Jones. “If he’s going to enter in a primary and challenge another Democratic member, then he should step aside from his responsibilities” as head of the Democratic Congressional Campaign Committee.

The conflict is arising from a draft map, released Monday by Special Master Jonathan Cervas, that would replace a congressional district plan drawn by the Democratic-controlled legislature that was struck down as unconstitutional gerrymandering. The state Supreme Court in Steuben County has until Friday to decide on the draft.

The potential of a primary battle between Maloney and Jones sparked public and private complaints from fellow Democrats that the head of the party organization in charge of doling out money and other assistance to candidates should not be in a position of challenging an incumbent.

Ocasio-Cortez said Maloney’s quick announcement that he would run in the new district “absolutely further imperils our majority by him vacating that seat, leaving it open, and also, really intruding on the district of a wonderful member.”

There was no immediate responses from Maloney through requests to his congressional office or the campaign committee.

Maloney lives in the newly redrawn 17th District just north of New York City, but Jones currently represents about 73% of the people who reside there. Jones’ residence would be in the new 16th District, as would another first-term progressive, Representative Jamaal Bowman. Jones has said he would wait until Friday, when the court is set to rule on the map, before making a decision on where he’ll run.

Party leaders have been trying to quell the dissent, and are urging New York Democrats to wait for the map to be finalized. House Speaker Nancy Pelosi defended Maloney Thursday, telling reporters he’s been a “great” chairman of the campaign committee who was elected by Democratic House members.

House Democratic Caucus Chair Hakeem Jeffries said the draft map “has degraded” Black congressional representation in four New York City-area districts, including his own in central Brooklyn, and Hispanic representation in another by moving neighborhoods into new or refashioned districts pitting Democrats against each other. Jones and Bowman are Black. But he also defended Maloney.

“I’m confident we are going to work it all out,” he said Wednesday on Bloomberg Television’s “Balance of Power with David Westin.” “What I’ve been encouraging everyone to do is make sure the effort is focusing on the flaws” of the proposed map.

The new map also would force a face off in an August primary between two veteran House Democrats, Representatives Carolyn Maloney and Jerrold Nadler, to represent a new Manhattan-based district. Both have said they intend to run, but Nadler says he hopes the maps are not approved.

The maps also created new openings for others. Former New York City Mayor Bill de Blasio tweeted that he is exploring running in a new district that includes portions of Nadler’s old district -- if the draft is approved.

New York Republican Representative Nicole Malliotakis on Thursday called the special master’s maps “more fair and competitive” than previous ones offered by Democrats, during an appearance on Bloomberg TV’s “Balance of Power with David Westin.”

She said Democrats who control the state’s Assembly and Senate created this situation with three previous efforts thrown out by the courts.

“Unfortunately, the Democrats chose to double down and really gerrymander,” she said. “It was that egregious, what they had done.”