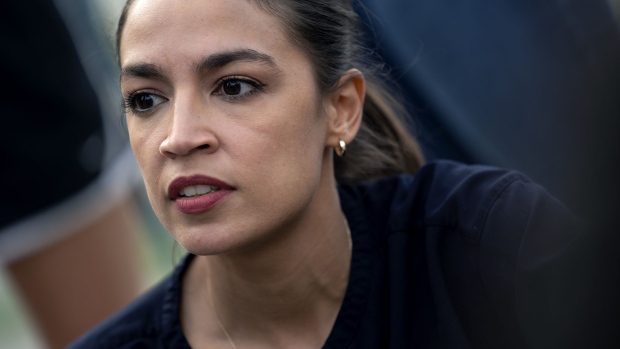 Representative Cori Bush, a Democrat from Missouri, speaks during a news conference in Minneapolis, Minnesota, U.S., on Friday, Sept. 3, 2021. A group of House Democrats called on President Biden to shut down construction of the Line 3 pipeline, citing indigenous opposition and environmental risks, The Hill reports. , Bloomberg

(Bloomberg) -- Progressive Representatives Cori Bush and Alexandria Ocasio-Cortez are leading a group of House Democrats in pressuring party leadership to include an expansion of unemployment aid in the $3.5 trillion tax and spending package being drawn up in Congress.

“The current state of the unemployment system is a threat to all communities, especially Black and brown communities, in many of the states we represent,” 13 lawmakers wrote in a letter Thursday to Speaker Nancy Pelosi and Senate Majority Leader Chuck Schumer. “We strongly urge Congress to include such improvements before the Build Back Better Act comes for a vote in the House and Senate.”

In addition to Bush and Ocasio-Cortez, the lawmakers who signed on the letter include Representatives Jerrold Nadler, Jamie Raskin, Mondaire Jones and Ilhan Omar.

Three supplemental federal unemployment benefits programs enacted in response to the coronavirus pandemic ended for millions of Americans on Sept. 6. One provided an extra $300 in weekly unemployment assistance, another extended benefits to workers that otherwise would not qualify, and a third gave additional aid to those who remain unemployed but ran out of state benefits.

Democrats opted not to extend the benefits before they expired as there was debate over whether there was a need to do so, despite signs that the pandemic is still dragging on the economy. Retail sales unexpectedly rose in August, suggesting that demand for goods remains strong. But a separate report showed weekly jobless claims increased.

The group of Democrats asked that legislation aimed at enacting much of President Joe Biden’s economic agenda include a set duration for unemployment insurance that states would be required to follow, benefits for part-time workers, a ban on exclusions based on wages and alternative base periods.

The lawmakers said they were concerned that some states will cut back on regular unemployment programs to offset the costs they incurred earlier in the pandemic, when widespread shutdowns drastically slowed the economy.

Ocasio-Cortez criticized Democrats during a town hall on Monday for a lack of consensus on extending benefits. The New York Democrat said she planned to introduce a bill that would renew all federal unemployment insurance until Feb. 1. Benefits that weren’t paid out following the Sept 6. expiration would be retroactively disbursed.

“We are very concerned that without federal reform our unemployment insurance system will become even weaker as states seek further program reductions to offset the additional UI expenditures required during the pandemic and subsequent recession,” the lawmakers wrote.