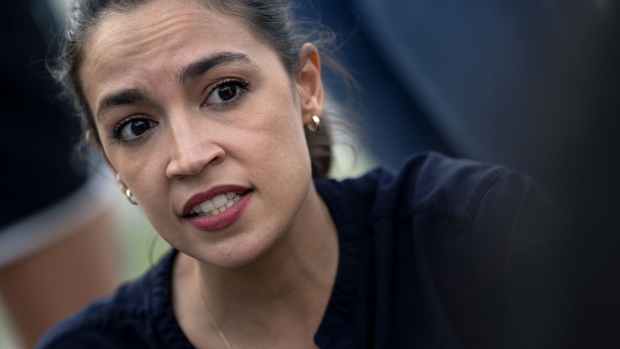 Representative Alexandria Ocasio-Cortez, a Democrat from New York, speaks while protesting the expiration of the eviction moratorium outside of the U.S. Capitol in Washington, D.C., U.S., on Sunday, Aug. 1, 2021. A last-minute extension of an eviction moratorium for renters collapsed Friday, leaving millions of Americans at risk of losing their homes after the ban lifts on Saturday. , Bloomberg

(Bloomberg) -- Representative Alexandria Ocasio-Cortez said she would introduce a bill to reinstate federal unemployment benefits programs that expired last week, despite a lack of appetite to do so among many of congressional Democrats.

“I’ve been very disappointed on both sides of the aisle that we’ve just simply allowed pandemic unemployment assistance to completely lapse when we are clearly not fully recovered from the cost effects of the pandemic,” the New York Democrat said during a virtual town hall on Tuesday evening.

Millions of Americans saw their federal benefits end on Sept. 6. Three programs expired that day, one that allotted an extra $300 in weekly unemployment assistance, another that provided benefits to workers who otherwise would not qualify and a third that gave aid to those who remain unemployed but have run out of state benefits.

Officials in 26 states previously opted out of the unemployment benefits program before the expiration. Advocates for withdrawal argued it would encourage unemployed Americans to return to the workforce.

Democrats debated whether to extend the benefits, but ultimately opted not to do so. House Ways and Means Chair Richard Neal, a Massachusetts Democrat, said President Joe Biden’s position was to “hold off” until there was more evidence.

Ocasio-Cortez said her measure would extend all federal unemployment insurance until Feb. 1. If the bill were to be enacted into law, benefits that did not get disbursed between the Sept. 6 expiration date and then, would be paid out retroactively.

“I’m not entirely sure the prospects of it and I want to be completely honest with you all on that,” Ocasio-Cortez said at the town hall. “We will work it, we will try, but I simply just could not allow us to let this happen without at least trying.”