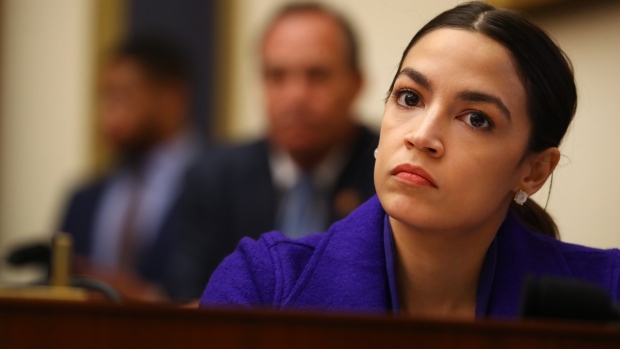 (Bloomberg) -- Representative Alexandria Ocasio-Cortez fired back at the top House Republican’s assertion that she should apologize for accusing the Trump administration of operating “concentration camps” to hold undocumented migrants at the U.S.-Mexico border.

The New York Democrat said Minority Leader Kevin McCarthy and other Republicans are “aiding and abetting” as “people are dying.”

“We’ve had 24 people die in these concentration camps that Trump has established on our border,” she told reporters Thursday.

The spat comes as President Donald Trump is threatening to deport “millions” of undocumented immigrants as soon as next week. “They will be removed as fast as they come in,” he said on Twitter.

On Wednesday, McCarthy of California said at a press conference that Ocasio-Cortez needs to apologize for using the concentration camp term, “not only to the nation but to the world. She does not understand history.”

But Ocasio-Cortez said Thursday that McCarthy “should apologize to parents who have been separated from their children.”

She asserted that efforts have failed to get information from the government on the location and condition of some of the children so that they can be unified with their families.

To contact the editors responsible for this story: Joe Sobczyk at jsobczyk@bloomberg.net, Laurie Asséo, Larry Liebert