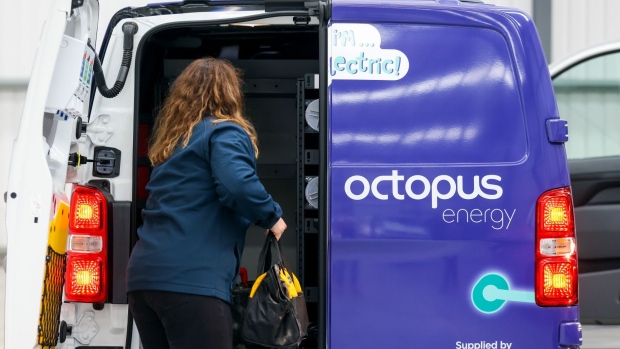 An employee loads tools in to a van at the Octopus Energy Ltd.'s training and R&D centre in Slough, U.K., on Tuesday, Sept. 28, 2021. Octopus, backed by Al Gore's sustainability fund, is helping teach the plumbers to install heat pumps that will play a pivotal role in the U.K.’s strategy to have net-zero emissions by 2050. , Bloomberg

(Bloomberg) -- Octopus Energy Ltd. is telling customers the looming increase in household bills could be blunted by 80% if the British government allows producers to spread ballooning costs over a longer period.

The rise in U.K. energy bills could be limited to about 12 pounds ($16.19) a month, instead of 60 pounds, if suppliers could access a fund to help them bear more of the increases in wholesale costs that eventually get passed on to customers, Chief Executive Officer Greg Jackson said in an email. The statement by Octopus, the country’s fifth-biggest domestic supplier, heightens pressure on the government just weeks before a regulatory price cap is increased.

“Every time I speak to a customer, I wish we could do more,” Jackson said in the email. “But the truth is this is an issue Octopus can’t solve alone.”

The cap on the amounts suppliers can charge consumers is, so far, shielding British households from the worst impact of a nearly 300% surge in gas prices the past year. But the current cap is expiring, and regulator Ofgem is due to announce a higher limit in February that will hit bills for about 22 million customers in April.

Octopus is pushing the idea of a fund, backed with either private loans or government money, that would be available to suppliers. But some of the biggest companies, including Centrica Plc, oppose the idea.

Other options under consideration include removing the 5% value-added tax and environmental levies from bills; extending financial help such as the Warm Home Discount for low-income households; or creating a contract through which the state would make payments to energy suppliers when wholesale gas prices spike, and companies would reimburse the government when prices fall below a certain level.

Eliminating the VAT and environmental levies will save an average home about 220 pounds a year out of a potential 700-pound price rise, Jackson said. That’s about a 30% reduction.

“The most impactful of these options is spreading the cost over several years, because it’s the only one big enough to make a real difference to all customers,” Jackson said. “It’s impossible to know when wholesale prices will return to normal levels, but the issues leading to the rise are mostly temporary.”

The business minister, Kwasi Kwarteng, said a relief package may not come before the Chancellor’s Spring Statement in March.

The U.K. Is Two Months Away From a Brutal Cost-of-Living Crisis

Producers are losing money on the price cap. Octopus buys energy for about 2,000 pounds per customer a year and then sells it for 1,300 pounds. That gap is hitting companies’ balance sheets, pushing 25 domestic suppliers out of business in the last six months.