The resurgence of the coronavirus pandemic has dramatically weakened the global recovery and it could get a lot worse if governments withdraw support too soon or fail to deliver effective vaccines, the OECD warned.

Cutting its 2021 global growth forecast to 4.2 per cent from five per cent in September, the Paris-based organization said a pattern of outbreaks and lockdowns is likely to continue for some time with rising risks of permanent damage.

There were particularly large downgrades for the euro area and the U.K., with the forecast for the latter slashed to 4.2 per cent from 7.6 per cent. The U.S. projection was lowered to 3.2 per cent from four per cent.

“Policy still has a lot to do,” OECD Chief Economist Laurence Boone said. “If public health or fiscal policy falter then we would see a loss of confidence and a much more depressing outlook.” 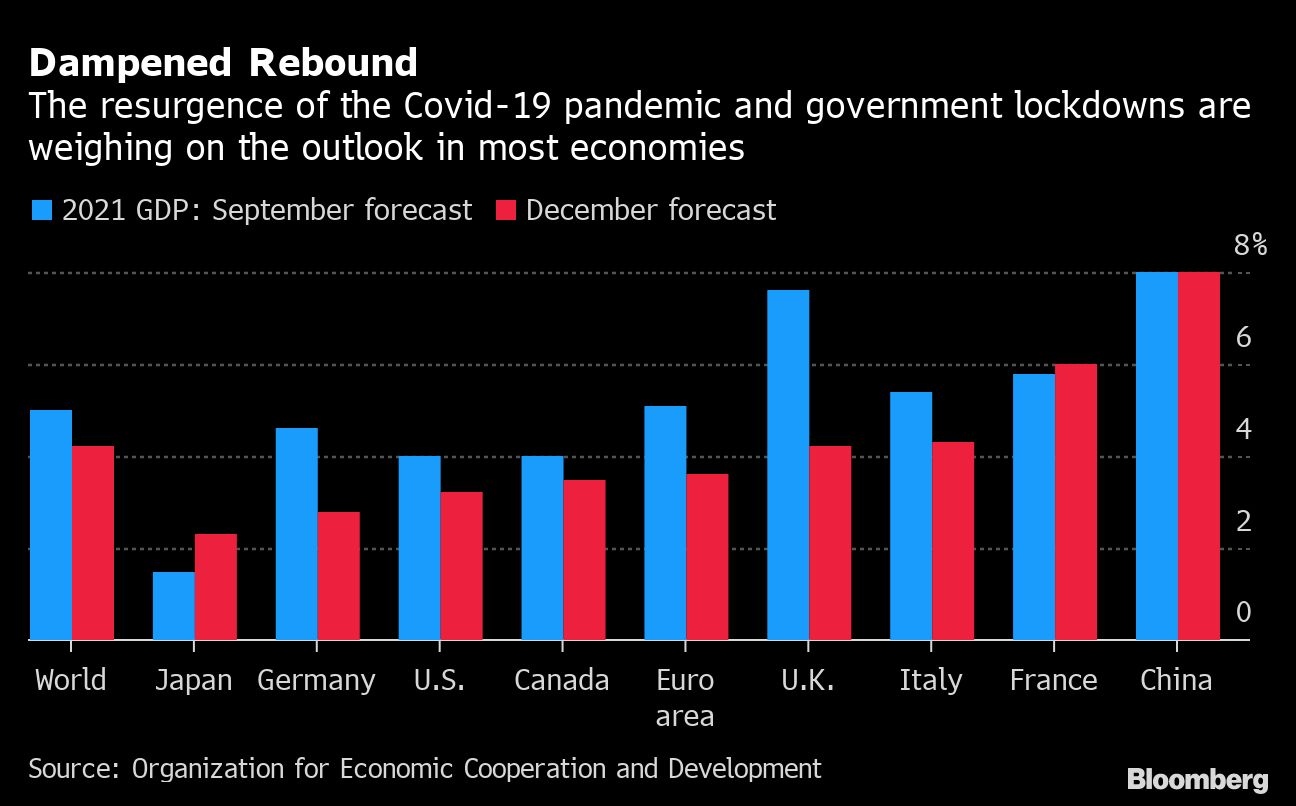 The renewed call for sustained government action highlights the fragility of the world economy as the sharp shock of the early months of the pandemic gives way to a prolonged slump in many regions. That cautious view is shared by central bankers despite the recent positive news on vaccines. On Monday, Federal Reserve Chair Jerome Powell warned that “significant challenges and uncertainties remain.”

Successful deployment of a Covid-19 treatment is one of the deciding factors in the trajectory of the recovery. It would allow governments to finally end lockdown measures, businesses to reopen and people return to work. With so much hope pinned on that, delays could have a shattering impact, according to the OECD.

“The toll on the economy could be severe, in turn raising the risk of financial turmoil from fragile sovereigns and corporates, with global spillovers,” Boone said.

There’s also a heightened risk of divergence between different regions that could develop into lasting changes in the world economy, the OECD said. Europe and North America will contribute less growth than their weight in the economy in 2021, while China will account for over a third of the global expansion.

Governments should continue to support their economies beyond the end of lockdown measures and avoid “fiscal cliffs,” according to the report. While public debt has soared, the OECD played down concerns, saying that borrowing costs are low.

It did, however, say some spending has been wasted, noting an “absence of correlation between the extent of fiscal aid and the resulting economic performance.”

Support should be targeted at vulnerable companies and groups that have suffered particularly in the crisis, including small firms that are more likely to go out of business, low earners and poor households with limited safety nets.

“Despite the huge policy band-aid, and even in an upside scenario, the pandemic will have damaged the socio-economic fabric of countries worldwide,” Boone said.