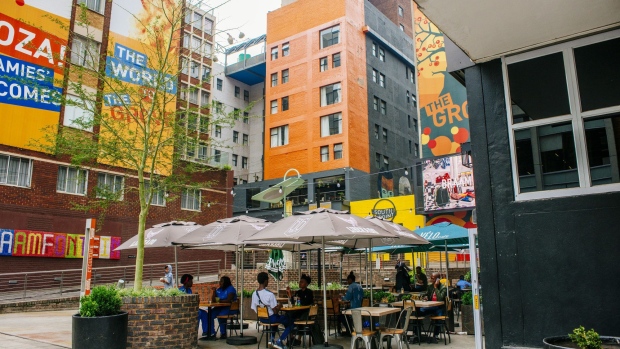 Customers sit at tables outside of a cafe in the Braamfontein district in Johannesburg, South Africa. Photographer: Waldo Swiegers/Bloomberg , Bloomberg

(Bloomberg) -- South Africa’s office and retail property market is gaining a second wind after years of being unloved, according to Investec Property Fund Ltd.

Half of the firm’s 77 new leases signed with clients in the year through March were in those sectors, creating an opportunity to dive back in after a period of disposals, Co-Chief Executive Officer Andrew Wooler said in an interview.

The fund, which has real-estate investments of 22.1 billion rand ($1.39 billion) in South Africa and Europe, had previously spent 2021 selling retail assets to free up capital for higher demand segments such as warehousing and logistics, he said.

“The pivot in South Africa is now that everything is certainly stabilized, and it feels like it’s stabilized in our portfolios,” Wooler said.

Investec Property Fund may dispose of its 65% stake in a pan-European logistics portfolio as rising property values and falling rental yields create an exit opportunity.

“There’s opportunity to exit and crystallize significant value for shareholders and then recycle that capital,” Wooler said.

The fund reported an 11% jump in earnings in the year through March, as vacancies more than halved. Property income advanced to 1.1 billion rand, delivering a 34% return to shareholders. The fund expects net operating income to climb as much as 5% in the coming year.