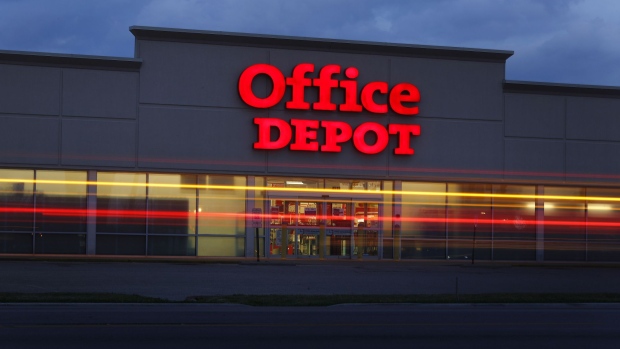 (Bloomberg) -- The parent of Office Depot and OfficeMax said it will delay plans to split into two publicly traded companies in order to evaluate a possible sale of its consumer business.

ODP Corp. received a nonbinding offer for the consumer business from an unidentified party in December, according to a statement Friday. Terms weren’t disclosed. The company is reviewing that proposal and is also still in talks with Sycamore Partners, the parent of rival office-supply retailer Staples. Sycamore had offered $1 billion in cash for the consumer business in June and reaffirmed that bid in November.

ODP said it’s evaluating the potential value and regulatory risk of Sycamore’s offer. Staples had previously tried to buy Office Depot, but the $6.3 billion acquisition was called off in 2016 due to antitrust scrutiny.

“If the consumer business is not sold, then ODP’s board of directors will reevaluate the advisability and timing of the public company separation,” Chief Executive Officer Gerry Smith said in the statement.

In May, Boca Raton, Florida-based ODP said it would spin off its Business Solutions Division contract unit and independent regional office-supply distribution operations into a new company, while retaining its retail and small-business products and services.