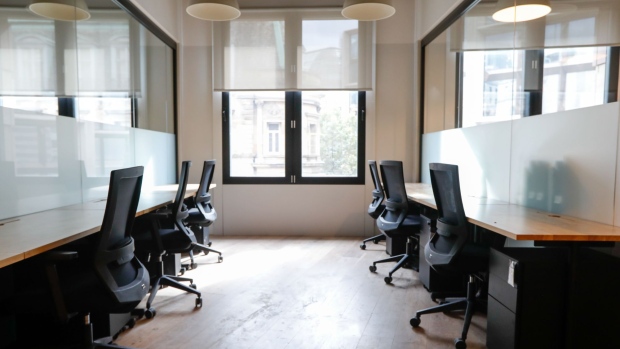 Furniture sits in its office waiting for its members in the WeWork Cos. co-working space at the One Poultry building in the City of London, U.K., on Wednesday, Oct. 3, 2018. Hana Financial Group Inc. is in talks to buy the building, best known for its stripes of pink and yellow limestone, that has been transformed into a major WeWork Cos. co-working space. Photographer: Luke MacGregor/Bloomberg , Bloomberg

Global pricing and demand for office space will take almost five years to recover from the damage wrought by the pandemic, according to a report by Cushman & Wakefield.

Vacancies worldwide are expected to peak at 15.6 per cent in 2022, with about 95.8 million square feet (8.9 million square meters) of space emptying over the next two years. That’s more than during the 2008 financial crisis, when tenants abandoned 85 million square feet of offices, the real estate services firm said Wednesday.

It’ll be 2025 before office markets rebound to their pre-COVID levels, when vacancies worldwide averaged 10.9 per cent, according to the report. The pressures and pace of recovery will vary regionally as the persistence of job losses and remote working reduce space needs in North America and Europe, while the new-supply pipeline in Asia’s developing economies grows faster than jobs.

“We expect vacancies to increase everywhere,” Rebecca Rockey, Cushman’s global head of forecasting, said in an interview. “It’s just that the underlying dynamics causing this change are a bit different from the West versus the East.”

The firm’s outlook -- developed to help its clients time the market to negotiate leases -- assumes businesses will need common space to foster the innovation, productivity and teamwork that are hard to sustain when everyone works remotely.

It’s a theme echoed by executives of some of the world’s biggest financial and technology companies, who are campaigning to get employees to return to the office. JPMorgan Chase & Co. Chief Executive Officer Jamie Dimon has said an extended stretch of working from home could bring economic and social damage.

So far, workers have been reluctant to come back. In the U.K., banks including Goldman Sachs Group Inc. and Citigroup Inc. are telling employees to stay home to help contain a resurgence of the virus. Others in New York and London have had to send workers home after new infections cropped up.

The share of people working from home is expected to double over the next five years, growing to 10 per cent in the U.S. and Europe, compared with just 1.2 per cent in China, where there’s more cultural pressure to show up at the office, Cushman said.