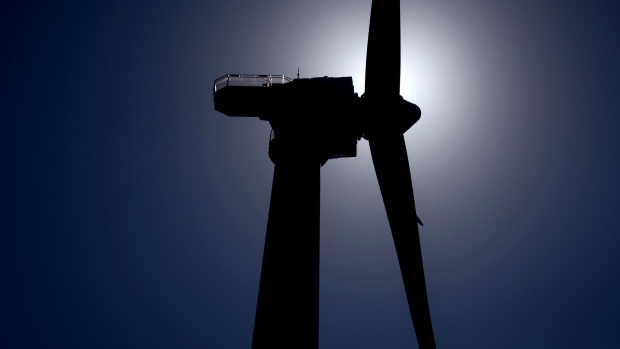 The silhouette of a GE-Alstom wind turbine is seen standing in the water off Block Island, Rhode Island, U.S., on Wednesday, Sept. 14, 2016. The installation of five 6-megawatt offshore-wind turbines at the Block Island project gives turbine supplier GE-Alstom first-mover advantage in the U.S. over its rivals Siemens and MHI-Vestas. Photographer: Eric Thayer/Bloomberg , Bloomberg

(Bloomberg) -- The U.S. Department of the Interior approved the construction of a wind farm off the coast of New York that will provide power for 70,000 homes.

The South Fork Wind project, a joint venture between Orsted AS and Eversource Energy, will consist of 12 turbines located 35 miles east of Montauk Point in New York and 19 miles southeast of Block Island in Rhode Island, according to a news release Wednesday. It’s slated to start construction in early 2022.

The project is the second major wind farm to gain approval, with another off the coast of Massachusetts breaking ground last week. Both projects are part of Biden administration goals to cut emissions and build 30 gigawatts of offshore wind energy by 2030. South Fork will generate about 130 megawatts.