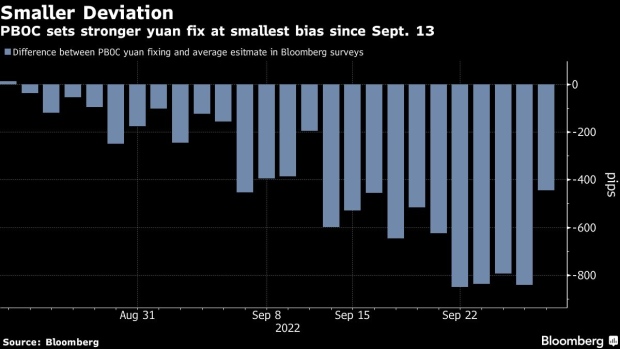 (Bloomberg) -- The onshore yuan fell to the weakest level against the dollar since the global financial crisis in 2008, amid an incessant advance in the greenback and speculation China is toning down its support for the local currency.

The onshore yuan weakened to 7.2409 per dollar, a level unseen in 14 years, while the offshore unit slid to an all-time low in data going back to 2010. The People’s Bank of China set the yuan fixing at 444 pips stronger than the average estimate in a Bloomberg survey. The strong bias was the smallest since Sept. 13, a sign that Beijing may be easing its support for the currency amid the greenback’s surge and a plunge in global exchange rates.

“The fix allows more room for market forces to drive the yuan based on monetary policy divergence and market momentum,” said Fiona Lim, senior foreign exchange strategist at Malayan Banking Bhd. in Singapore. “This does not mean that PBOC will not deploy other tools to prop up the yuan. We cannot help but note that the move this morning could contribute to drags on other non-dollar currencies that are already under pressure.”

The onshore yuan has fallen more than 4% against the dollar this month and is on track for worst annual loss since 1994. The currency is under pressure as the nation’s monetary policy diverges with the US, driving outflows. Federal Reserve officials including St. Louis Fed chief James Bullard on Tuesday pushed for higher interest rates to restore price stability. Beijing on the other hand is keeping an accommodative stance amid the rising risk of deflation as demand slumps under the weight of the ongoing property crisis and Covid restrictions.

The PBOC has been taking steps to support the yuan, though the moves yielded limited results. On Monday the yuan traded 1.98% weaker than the reference rate set by the central bank, close to the 2% trading limit around the fixing. The offshore yuan weakened as much as 1.1% on Wednesday to 7.2574 per dollar.

The central bank has set stronger-than-expected yuan fixings for 25 straight sessions through Wednesday, the longest streak on record since Bloomberg started the survey in 2018. Earlier this week it imposed a risk reserve requirement of 20% on currency forward sales by banks to make it more expensive to short the yuan. That’s after an earlier move to reduce the foreign-currency reserve requirements for banks.

The PBOC’s softer pushback on Wednesday could be because the yuan is still holding relatively steady against currencies of its 24 major trading partners, data from a Bloomberg real-time tracker of the CFETS RMB Index show. Some analysts also speculate that China may be less resistant to a depreciating yuan as a weaker currency could boost exports and support the slowing economy.

Meanwhile, policymakers in Japan, South Korea and India are stepping up their currency defense as the dollar’s rally shows few signs of easing. Asian central banks may activate the ‘second line of defense’ such as macroprudential and capital accounts tools, according to a note from Nomura Holdings Inc. Taiwan officials Tuesday raised the prospect of foreign-exchange controls and a ban on stock short sales if capital outflows worsen significantly.

White House National Economic Council Director Brian Deese said he didn’t expect another 1985-type agreement among major economies to counter the dollar’s strength. The dollar could see further gains as US appears unconcerned over the currency’s appreciation, said Rajeev De Mello, a global macro portfolio manager at GAMA Asset Management in Geneva. “In fact, it serves them in their fight against inflation, he said.

More bearish calls on the yuan are emerging this week. Morgan Stanley sees the currency ending the year around 7.3 per dollar. United Overseas Bank cut its forecast for yuan to 7.25 by middle of next year, from 7.1 previously.

Dollar-onshore yuan quotes were briefly interrupted on the China Foreign Exchange Trade System’s website and terminals including Bloomberg after 9:30 a.m. local time, according to traders who asked not to be identified because they aren’t authorized to speak publicly. The episode lasted for about half an hour and the CFETS price feed has since returned to normal, Bloomberg-compiled data show.

The yuan’s weakness may push the PBOC to delay any further monetary policy easing until later this year. After a surprise cut to a key interest rate in August, the PBOC paused its easing this month even as the Fed hiked rates. Bloomberg Economics estimates the Fed will tighten through the rest of 2022 and 2023, and the PBOC will maintain an easing stance over the period, cutting its one-year rate to 2.45% by end-2023.

“China has shifted to allow exchange rate to be a shock absorber, and hence a more market oriented style,” said Ju Wang head of greater China foreign exchange and rates strategy at BNP Paribas SA. “It may also reflect the central bank’s judgment that the broad dollar strength is not going to ease any time soon, now it is up to the market to decide where the fair value is.”

(Updates updates with background on yuan moves in 5th paragraph.)