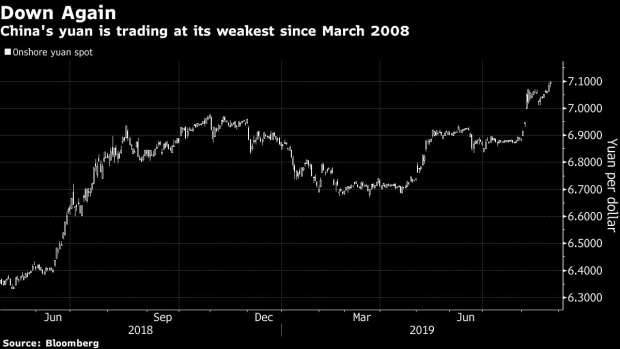 (Bloomberg) -- The offshore yuan slumped to the lowest level since it was created in 2010 as the trade war with the U.S. intensified with tit-for-tat tariffs.

The currency fell as much as 0.86% to 7.1926 per dollar on Monday, extending Friday’s losses after China said it would impose retaliatory tariffs on another $75 billion of U.S. goods. President Donald Trump responded after equity markets closed by announcing additional levies on Chinese imports. He also called for American companies to pull out of Asia’s largest economy.

Traders will be watching to see if Chinese officials take steps to stabilize its currency, or whether they let it continue to depreciate. The onshore yuan has fallen about 1% against the dollar in a seven-day losing streak and closed at an 11-year low on Friday.

Worsening trade tensions may further undermine sentiment toward Hong Kong equities, which have been battered by concern over violent street protests and an economic slowdown. In the 12th weekend of disturbances, police and protesters were involved in clashes in the western New Territories district of Tsuen Wan.

“It’s not only China central government’s authority but also its responsibility to intervene when riots take place in Hong Kong,” the state-run Xinhua News Agency said Sunday in a commentary, drawing on comments by former top leader Deng Xiaoping saying Beijing has to act under such circumstances.

To contact the reporter on this story: Richard Frost in Hong Kong at rfrost4@bloomberg.net

To contact the editor responsible for this story: Sarah Wells at smcdonald23@bloomberg.net