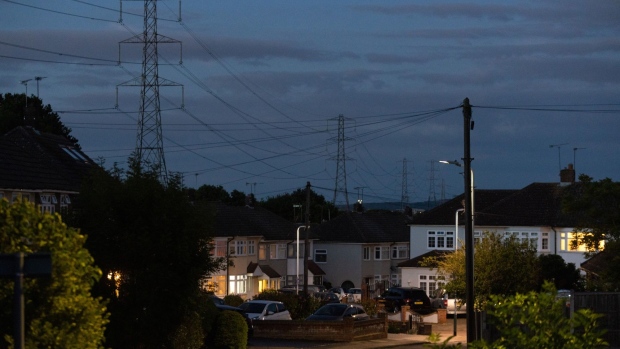 Electricity transmission towers near residential houses with lights on in Upminster, UK, on Monday, July 4, 2022. The UK is set to water down one of its key climate change policies as it battles soaring energy prices that have contributed to a cost-of-living crisis for millions of consumers. , Bloomberg

Power and gas costs will almost double on Oct. 1 compared with last winter, and stay capped for two years after Prime Minister Liz Truss stepped in to stem even more extreme rises. While support caps the typical annual household bill at £2,500 ($2,705), it’s higher than ever before. That means consumers face being unable to pay bills and may need to seek suppliers’ help or stop using energy entirely.

Scottish Power Ltd. and Utilita Energy Ltd. were called out for having “severe” weaknesses in the way they deal with customers with payment difficulties, the regulator said in a statement on Tuesday. Ofgem’s review of suppliers found issues with lack of policy and management oversight that was tailored to struggling customers and a lack of adequate training materials for staff.

“We accept that there are many pressures on energy companies in the market this winter, but the needs of vulnerable customers must be part of their top priorities,” Ofgem Chief Executive Officer Jonathan Brearley said.

Utilita and Scottish Power pushed back against Ofgem’s notice, both saying in emailed statements that they were “disappointed” in the regulator’s conclusions.

“Our staff are deeply committed to helping customers through the cost-of-living crisis and as a business we will provide tens of millions of pounds to support our customers this winter,” a Utilita spokesperson said.

(Updates with comment from suppliers in final two paragraphs)