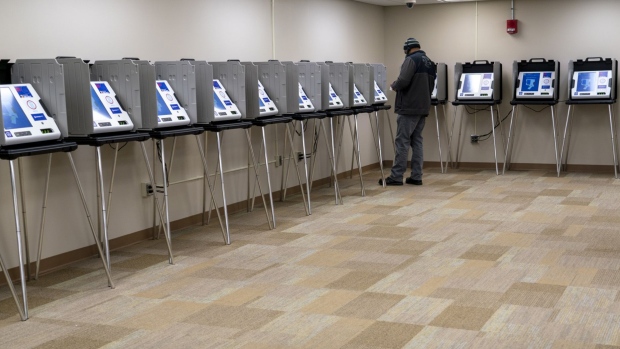 A voter casts a ballot early in a polling station at the Montgomery County Board of Elections in Dayton, Ohio. , Photographer: Kyle Grillot/Bloomberg

(Bloomberg) -- Restricting each Ohio county to one ballot drop box for the 2020 presidential election to ensure equality is “nonsense,” a judge said in scrapping the limit put in place by the Republican secretary of state.

Frank LaRose’s Aug. 12 directive is “arbitrary and unreasonable,” especially during an election defined by a pandemic-induced surge in mail-in voting and U.S. Postal Service delays, state Judge Richard A. Frye ruled Tuesday in Columbus. Frye in particular slammed LaRose’s claim that limiting each county to one drop box was “equal treatment.”

It is “equivalent to arguing that every county needs only 100 (or some other arbitrary number) of voting machines, regardless of the population,” Frye said in his decision. “That view of ‘equal’ treatment is nonsense.”

The decision underscores the diverging views that Democrats and Republicans have on the expected surge in mail-in voting, which President Donald Trump has repeatedly claimed without evidence will lead to a massive fraud and a “rigged” election. While Ohio Democrats sued over the drop-box limit, the state’s Republican Party intervened to defend it.

LaRose’s office didn’t immediately respond to a request for comment on the ruling.

Ohio sends applications for absentee or mail-in voting to all eligible voters, who can cast their ballots and mail them in, or drop them off in the drop boxes, which LaRose required be placed only outside each county’s board of elections office.

The state’s 88 counties range in population from hundreds of thousands of voters to fewer than 10,000, a disparity that triggered fears of voter suppression in bigger counties where it would be harder to use a single drop box.

“Wholly arbitrary rules are entitled to no deference,” Frye wrote.

As for security, the judge said in his decision that current state protocol requires that drop boxes be monitored 24 hours a day, seven days a week and that absentee ballots that are dropped off must be retrieved by at least one Republican and one Democratic member of the board of elections or board staff at least once each day.