Commodities from oil to corn jumped following media reports of Russian missiles crossing into Poland, as the potential for a widening conflict jolted the market out of slowdown-related concerns.

West Texas Intermediate futures climbed as much as 3.3 per cent following a quick succession of reports signaling Russia’s offensive in Ukraine may be spilling across borders. Futures pared gains to settle near US$87 a barrel.

The Associated Press reported two people were killed in Poland by Russian missiles. Amid a barrage of shelling that struck Kyiv and other targets in Ukraine, Hungarian energy company MOL said a power station serving Europe’s largest pipeline was struck by artillery fire, halting deliveries on the Druzhba pipeline.

The U.S. is aware of the reports of missiles landing in the NATO member country and is looking into them, said a Pentagon spokesman at a press briefing. Russia’s defense ministry denied that its military had aimed missiles at targets near the border with Poland.

“The market is going to have to recalibrate the potential risk to global oil supplies if this war escalates,” said Phil Flynn, a senior market analyst at Price Futures Group. “It’s going to be critical to see how NATO and the United States decide to respond to this provocation.” 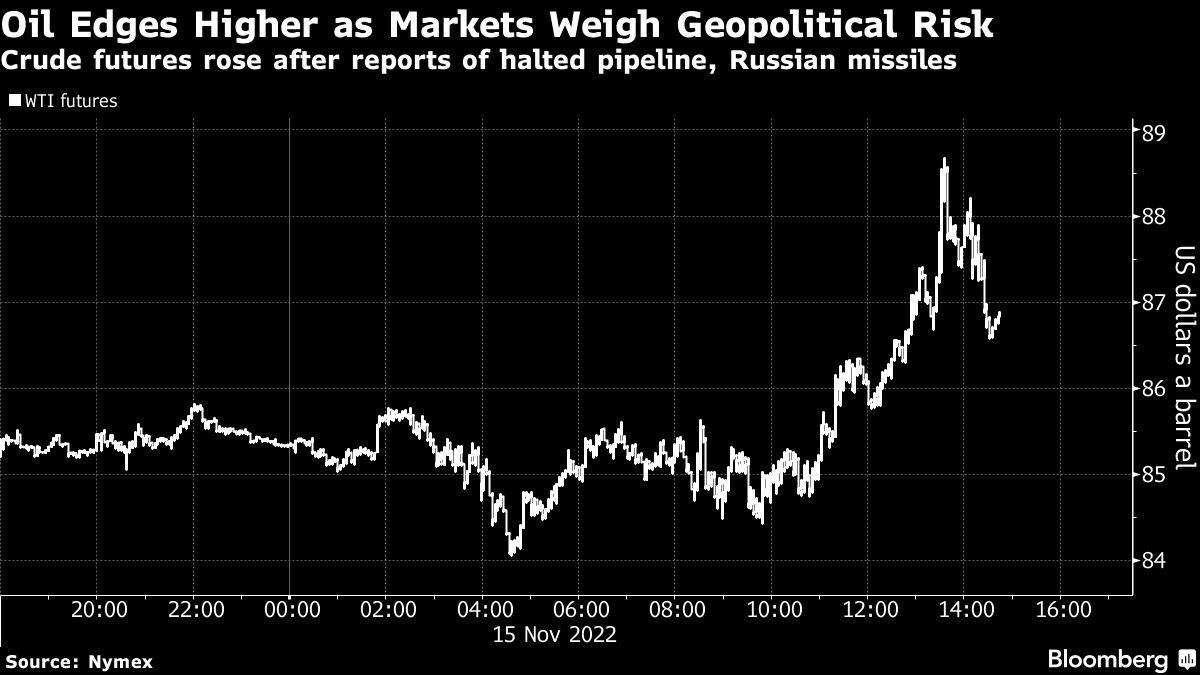 While crude has lost about a third of its value since early June on economic slowdown concerns, markets remain volatile as geopolitical risk constantly threatens already tight fuel balances. As investors continue to watch for any clues about how much further central banks will pursue measures to slow down inflation -- risking a recession --the International Energy Agency noted Tuesday that oil inventories in developed nations have sunk to the lowest since 2014.

European Union sanctions on Russia will curb flows from December.

Crop futures also jumped on concern that any potential escalation in the war may endanger a deal that has allowed exports of grains from Ukraine through the Black Sea. Chicago wheat erased an earlier decline to rise as much as 2.9 per cent, before trimming some of the gains to settle 1.2 per cent higher at US$8.48 a bushel. Corn rose 1.5 per cent and soybeans 1.2 per cent.