An oil glut coupled with a COVID-induced free-fall in global demand sent energy stocks spiraling a year ago. Now, as the world begins to recover from the pandemic, oil bulls who stayed the course are enjoying big returns.

“The scarier it is as a business, the better the investment prospects are,” said Josh Young, chief investment officer at Bison Interests LLC, who seeks out dislocations in the energy equity markets.

With improved Canadian oil pricing and reduced concerns around pipeline capacity, Bison has been redeploying capital away from U.S. shale and into shares of Canadian energy producers including Tamarack Valley Energy Ltd. The Houston-based fund has risen about 90 per cent this year.

The OPEC+ decision last week to keep output largely unchanged along with an attack on the world’s largest crude terminal in Saudi Arabia briefly sent Brent oil futures above US$71 a barrel early Monday. Futures in New York bounced between gains and losses on Tuesday, with West Texas Intermediate Crude around US$65 a barrel. 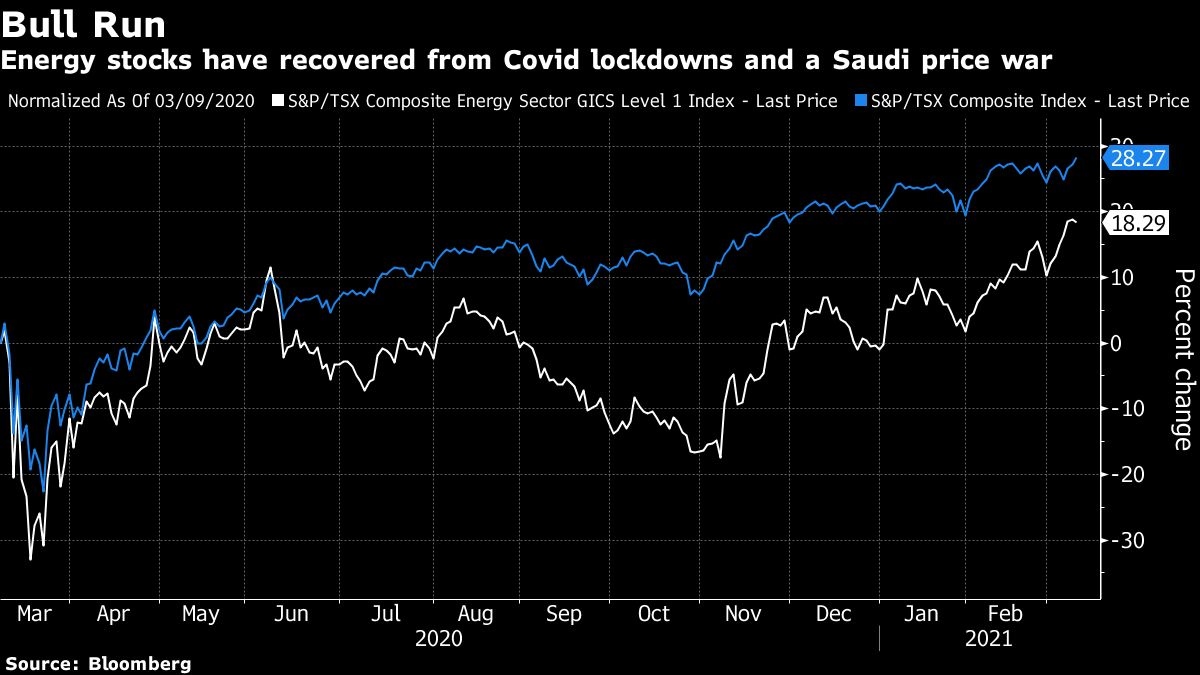 Investors are increasingly confident that any oversupply will be absorbed by soaring demand as more people are vaccinated and life slowly returns to normal.

“The fear of peak demand is leading us to the reality of peak supply,” said Eric Nuttall, senior portfolio manager of the Ninepoint Partners LP energy fund in Toronto, which has gained about 70 per cent this year.

There was less planning involved in last year’s oversupply. Last March, coronavirus lockdowns began in western economies just as Saudi Arabia began flooding the market with oil in an all-out price war. Energy equities plummeted: At one point Canada’s energy index was down 53 per cent for the year. It’s risen about 20 per cent to start 2021.

Then in January, in one of his first acts as U.S. president, Joe Biden canceled the Keystone XL oil pipeline, the type of move that would normally be a major setback for the patch. But with construction under way on other pipelines, the Canadian portion of Enbridge Inc.’s Line 3 online, and a drive for profitability through spending cuts, bulls have sent signals that this cycle may be different from its predecessors.

Nuttall, whose holdings include MEG Energy Corp. and NuVista Energy Ltd., says he thinks Canadian energy stocks have more upside versus those south of the border, where a new Biden administration is more hostile to fossil fuels. At the same time, Canadian pipeline capacity is improving despite the Keystone XL decision. Nuttall said that small- to mid-cap shares have aided his fund’s performance this year.

Generalist investors, who seek to own assets in a wide range of industries, have avoided oil and gas stocks because of price volatility over the last few years. Stabilizing prices could change that equation, Nuttall said, as margins increase and as other equities become overvalued.

In an interview, Picton called those investments “more of a trading call” because he’s not convinced that energy is a good long-term bet.

--With assistance from Esteban Duarte and Robert Tuttle.