Oil rose after the OPEC+ alliance agreed to increase oil production gradually over the next three months.

Futures advanced in New York after choppy trading as details of the deal were revealed. The agreement between the Organization of Petroleum Exporting Countries and its allies to increase production from May to July includes a phasing out of Saudi Arabia’s unilateral 1-million barrel-a-day supply cut, according to delegates. 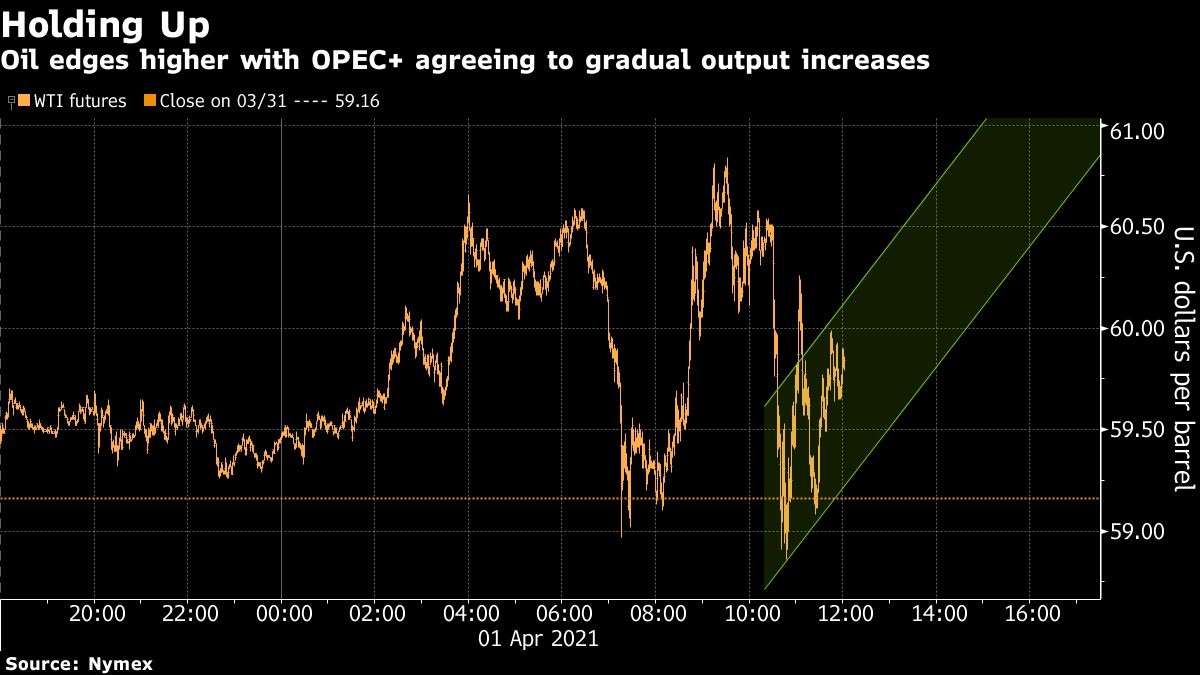 While the rollout of coronavirus vaccines and supply curbs underpinned a fourth quarterly gain for crude, the rebound has faltered in recent weeks on concern that near-term consumption is at risk, particularly in Europe where France is heading for a month-long lockdown. Still, supplies are expected to tighten into the northern hemisphere’s summer season as economies continue to recover from the pandemic.

“The global picture is mostly a bright one in terms of the economy and oil demand, and there are a few spots like Europe that may be in trouble,” said Michael Lynch, president of Strategic Energy & Economic Research. “But compared to what we saw last year, it looks like we’re still on an upward trajectory for demand and possibly prices.”

Data from the U.S. and Asia do bolster the case for OPEC+ to loosen the taps. Americans are driving and flying the most since the pandemic began, U.S. refineries are processing the most oil since early March last year, and the nation’s stockpiles have shrunk for the first time in six weeks.

In Asia, Japan’s large manufacturers have turned optimistic for the first time since the fall of 2019, while South Korea’s exports have risen the most in more than two years. Indian gasoline sales topped 2019 levels in March, though diesel sales were lower.

Elsewhere the picture is weaker. In Europe, France’s four-week lockdown begins on Saturday, while Italy and Germany have extended partial shutdowns. The Canadian province of Ontario, home to Toronto and the capital Ottawa, will be locked down for 28 days, CBC News said. And in South America, Brazil detected a new COVID-19 variant as it again saw record deaths.