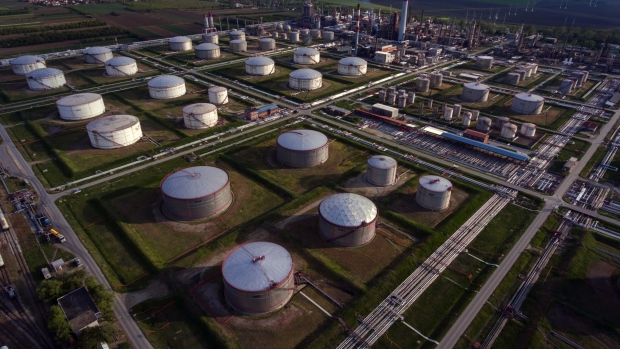 Oil surpassed US$65 a barrel, the highest since mid-March, as signs of strengthening demand from the U.S. to China stoked optimism that key markets are turning a corner in their recovery from the pandemic.

U.S. benchmark crude futures rose 1.8 per cent on Thursday for a third straight daily gain. Major cities in the U.S. are coming out of lockdown, with New York City aiming to fully reopen July 1 and Chicago broadly easing restrictions across industries. In Europe, the U.K.’s road-fuel sales are nearing last year’s summer levels. Consumption may also get a boost when China breaks for an extended holiday on Saturday, with mobility expected to climb to a record.

“Eyes are on global demand,” said Gary Cunningham, director at Stamford, Connecticut-based Tradition Energy. “The U.S. is seeing many states ease restrictions and the opportunity for summer travel, and therefore petroleum demand, to have a significant rebound. If the U.S. sets pace and reopens,” the hope is other countries will follow. 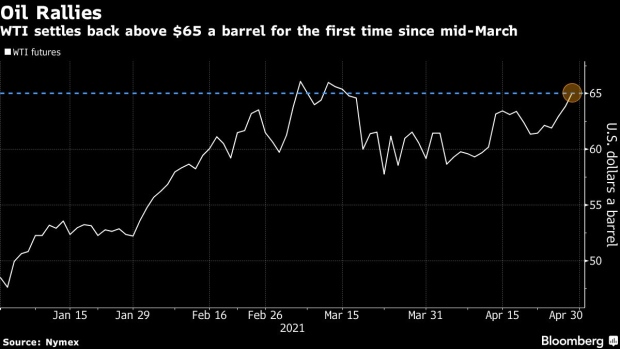 Oil’s rally took a pause in recent weeks with the resurgent pandemic in countries such as India, Brazil and Japan imperiling a worldwide return to normal demand. India has been hit particularly hard by a second wave that’s pummeled fuel consumption, prompting some refiners there to consider boosting exports in a bid to avoid deep cuts to crude processing.

But commodities across the board have gained in recent sessions with broader optimism on the recovery in key economies and tightening supplies in raw materials lifting spot prices to near-decade highs. The premium on near-term deliveries over future deliveries for commodities tracked by the Bloomberg Commodity Index has jumped to the highest in over 15 years, signaling immediate physical shortages across different markets, a managing director at Pacific Investment Management Co. said.

The market recovery is flowing through to big oil companies. Royal Dutch Shell Plc’s profit rose more than expected in the first quarter, while Total SE also had a strong start to the year. U.S. refiners have been inching up production ahead of the summer driving season. PBF Energy said it expects to run at higher rates in the second quarter, pointing to U.S. gasoline consumption already at 95 per cent of normal levels and higher overall fuel demand.

Higher daily U.S. airport foot traffic and airlines adding more flights point to a summer travel season that may be “significantly more robust” than is being priced in, Bank of America Global Research said in a report.

“Taken together, we believe these signals affirm that an eventual recovery in demand is a question of ‘when’ not ‘if,’ with risks that the pace may be quickening even versus very bullish GDP growth estimates,” analysts including Doug Leggate and Kalei Akamine wrote.

Still, COVID-19 hotspots do pose some short-term risks to a sustained price rally and are starting to show in gauges of market health. The structure of the Middle Eastern Dubai benchmark flipped into a slight contango on Thursday, an indication that market tightness may be easing. Differentials for U.S. sour crudes fell to their weakest in at least two weeks on weaker demand from Indian refiners.