Crude demand will depend on employment and economic growth over the next few months: Andrew Lebow

Oil in New York jumped to the highest in nearly two months in tandem with a stronger broader market while investors focus on declining global stockpiles.

U.S. crude futures rose as much as 1.8 per cent on Thursday, reversing an earlier decline, and Brent crude hit the highest intraday level since early July. U.S. equities gained and the dollar weakened, boosting the appeal of commodities priced in the currency.

Crude inventories in the U.S. are at the lowest since 2018 with output levels weaker after recent U.S. Gulf Coast storms. Meanwhile, supplies at a key hub in Europe remain below average levels for the time of year. With stockpiles depleting, the market’s structure has also strengthened. West Texas Intermediate crude futures’ nearest contract is trading at the biggest premium to its second-month contract since early August.

“There will be some sort of tightening in supply,” said Bart Melek, head of commodity strategy at Toronto Dominion Bank. “We’re still not seeing a very robust recovery in U.S. production levels, so we have a situation where demand is deemed to look a little bit better and the supply side is at risk of not delivering what we thought.” 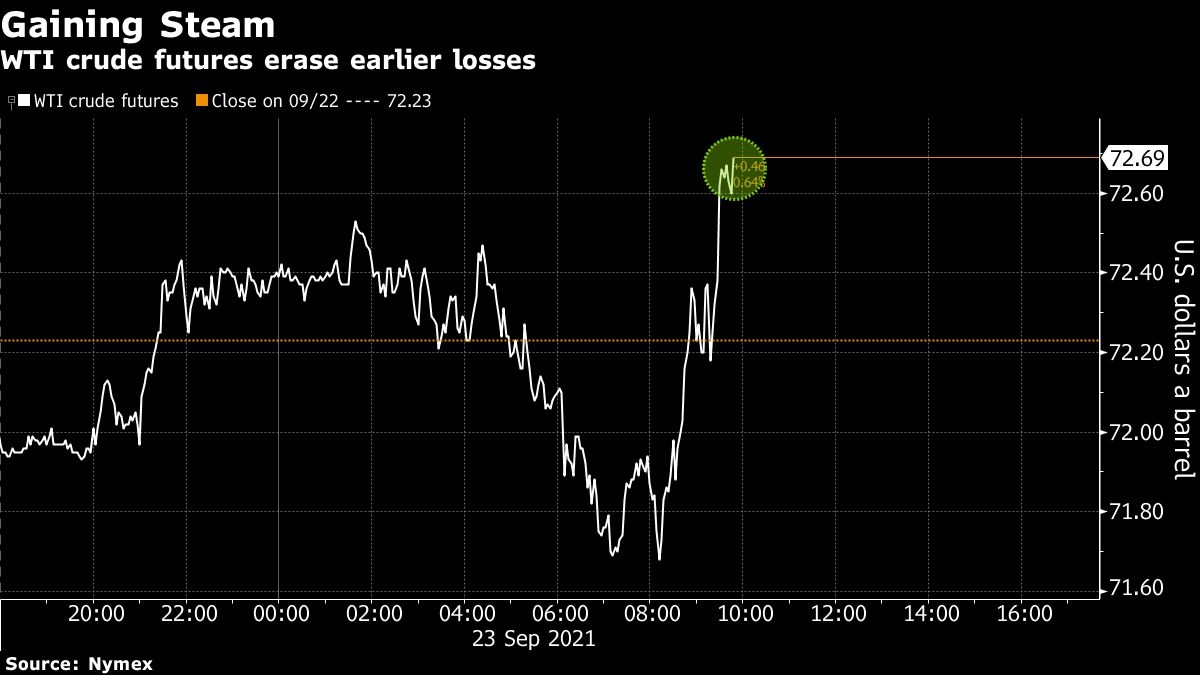 Traders have been weighing the impact of a tightening natural gas market on the broader energy complex over winter, with Goldman Sachs Group Inc. predicting a demand boost could help crude advance to US$90 a barrel if conditions are colder than normal. Vitol Group sees global crude demand climbing by an extra half a million barrels a day this winter as the gas-led energy crunch drives a rush for other fuels.

The focus has led to cross-commodity flows across the oil and gas markets, some of which have been unwound in recent days, which had helped to push crude higher.

“With coal and gas rallying higher it is definitely spilling over into oil both through association,” said Bjarne Schieldrop, chief commodities analyst at SEB AB, referencing prices so far this week. “But also explicitly with substitution of oil for gas as gas is two times the price of oil.”

Oil is most likely headed above US$80 a barrel, partly as higher gas prices boost demand, Vitol Chief Executive Officer Russell Hardy said in an interview from London on Thursday. That could force OPEC+ producers to add more supply into the market, he said.

Currently, technical indicators show oil’s rally may be due for a pullback in the near-term. WTI crude is flirting with the upper Bollinger band, a technical signal indicating the commodity is overbought.