Futures advanced 1 per cent in New York on Thursday. Domestic crude and gasoline supplies tumbled last week and a gauge of fuel demand jumped to 10 million barrels a day during the week leading up to the July 4th holiday, according to the Energy Information Administration.

“Clearly in the U.S., we’re seeing a strong recovery in demand,” said Quinn Kiley, a portfolio manager at Tortoise, a firm that markets roughly US$8 billion in energy-related assets. “It’s a bullish setup.” 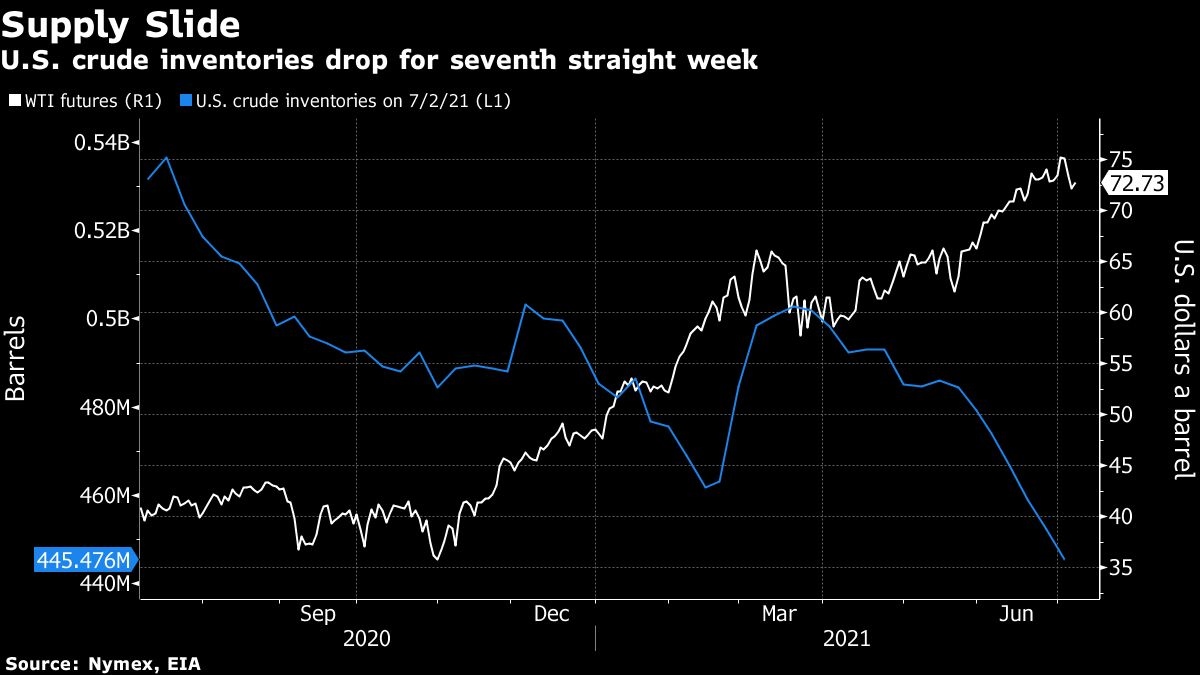 Oil prices rose 11 per cent last month before volatile trading this week in the wake of the OPEC+ impasse. Global supplies have tightened amid strong recoveries in economies such as the U.S. and China, leading to calls for the alliance to increase supply in the coming months.

In the U.S., crude supplies fell by nearly 7 million barrels last week and gasoline inventories tumbled by the most since March, according to the EIA report. The country’s crude production has remained “lackluster” despite improved prices, which suggests the crude curve will stay in backwardation, said a new research report by Goldman Sachs Group Inc.

“The market did what it should do,” said Andrew Lebow, senior partner at Commodity Research Group. “It rallied to bullish news.”

At the same time, OPEC+ members are also stalled over the question of how to increase supply in August and subsequent months. United Arab Emirates has blocked the agreement in a bid to raise its production quota. The ongoing stalemate has limited crude’s rally for now, said Kiley.

“That’s still the overarching concern in broader markets,” he said.

Meanwhile, the spread of the delta variant is also leading to concerns. The World Health Organization urged caution on the pace of reopenings worldwide, with many regions seeing infections spreading. Countries such as Japan, Indonesia and Thailand have renewed restrictions on mobility to curb the spread.

“The market is realizing that the delta variant and other variants of concern could very well slow the rate of demand recovery, even in the United States,” said Bart Melek, head of commodity strategy at TD Securities.